Did you think I couldn't see you? 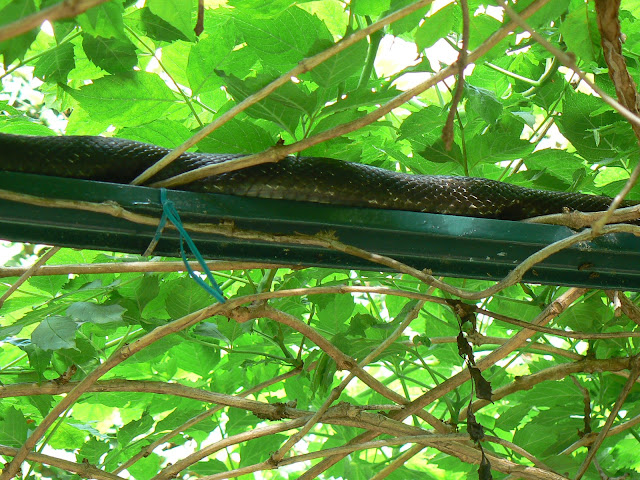 When I was in grammar school (that's what we called elementary school), I grew accustomed to having a snake around.  My brother had a Southern hognose snake named Pancake.  He lived in a cage (which I now realize was not in the creature's best interest) for at least a couple of years before he was set free.  I won't go into the lengths my parents went to in order to feed this snake, but it involved frequent trips to a lake at night with a flashlight.

Anyway, my brother and his friend Richard (who is now my go-to snake information person) were constantly playing with snakes.  In our yard, we had mostly ring neck, garter and green snakes.  I'm not talking about a lot of them, but I would see a snake on occasion.  Of course, we took Pancake out and played with him.  Once, someone (probably Richard) brought over a rather large king snake, and I remember bravely wrapping the snake around my neck to show off in front of my friends.  I secretly didn't like the feel of it, but I wanted them to think I was brave.

The only thing I didn't like was when a snake was hanging overhead.  This happened to me once.  Not that green snakes ever got very big, but I was in my hideout in a big stand of privet, when one came dangling down next to me.  I screamed and ran out as fast as I could.  I never went into that hideout again.  When my brother laughed, I accused him of putting the snake in there.  He denies it to this day.

I think it was three years ago that a guy I'd hired to neaten up the vines in my tunnel arbor let out a blood-curdling yell.  I came running.  The young man pointed to a very long rat snake lying camouflaged in the vines just a few inches from where he was clipping.

For days, I watched the snake.  Sometimes, he would curl up.  Other times, he would be stretched out in the tangle of vines.  One day, I looked up thinking, "Wow.  This snake has grown to about 12 feet long." Then, I realized that there were two of them.  I don't know what they were doing, but it did look like one super-long snake.  At one point, I went out, and there was only one snake, but he was hanging down, which sort of gave me a bit of a start.  He must have dropped to the ground after that.  I didn't see him anymore.

I have a strict no-kill snake policy around here.  I've only once in 39 years come upon a copperhead, and I admit that gave me a scare.  I took the dogs and put them in the house and ran back with my camera.  By that time, he had moved off the driveway and disappeared.

This year, I've seen one king snake and an extremely long rat snake.  The dogs were barking at the latter.  He was so long that he wouldn't fit in the frame of my camera from a reasonable distance.  He was also pretending to be a rattlesnake.  I looked on in amazement as his tail vibrated and made a hissing sound.  I put my camera on movie mode and watched as he finally slithered away.  My friend Richard later i.d.'ed the snake and explained the rattling.

Okay.  I have many snake stories (like the time I was in my kitchen and saw a stick on the dining room floor.  Then, the stick moved.  That one ended up coiled around the top of a copper bucket under the hunt board).

Here's the last one, I promise.  My beautiful, elegant mother-in-law was visiting one May.  It was a lovely Saturday morning, and we were all sitting out on the music room terrace, reading the newspaper and drinking coffee.  All of a sudden, I saw the head of a snake coming up from a hole in the stone that had been cut out to plant trumpet vine.  Then, came the body.  He was long, and to my horror, was headed right for my mother-in-law's feet.  I couldn't breathe.  If I said something, she might have a heart attack.  If I didn't, and if the snake slithered across her quilted silk bedroom shoes, she might have a heart attack.  I was too frozen to do anything but watch.  The snake, not making a sound, came within inches of her feet.  My husband, thank goodness, didn't look down.  The snake crossed the entire length of the terrace and disappeared into some liriope along the side of the house.

I've gotten careless of late and forget to look up when I walk under the 40 foot long trumpet vine arbor. As I said, I don't believe in killing harmless snakes, but I admit I get a chill when I look down (or up) and see one slithering along or curled up under a bush.  I'm not like Richard, who still picks them up and plays with them for a bit before letting them go.  I just walk in the other direction as fast as I can.