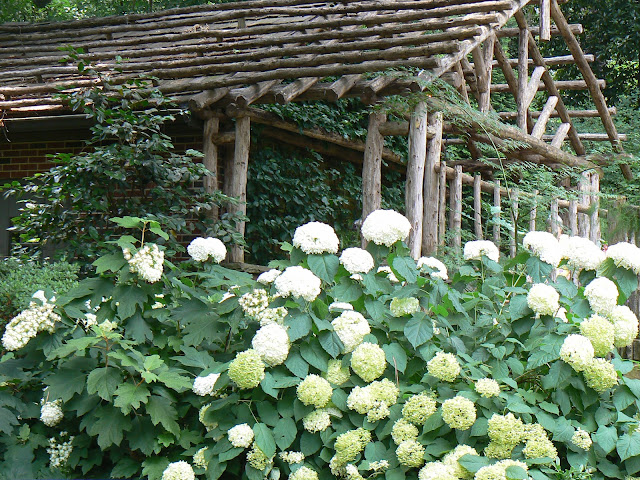 If you saw yesterday's post, you are aware that this is a garden structure that holds a swing.  Here's the view from a few steps below, next to a lovely garden pool.

This year, I'm going to have to be content with photographs of the popular 'Annabelle' hydrangea (above, with oakleafs over to the left).  The deer have ravaged mine.  Ditto the Casa Blanca lilies, purple garden phlox, a new clematis and the seedlings of Rudbeckia 'Indian Summer', of which I was very proud - I didn't know they would spread as they did (usually, they aren't hardy here).

While I was gone for three days, the creatures must have had a blast.  They pinched the tops from the pink daisy chrysanthemums (that won't hurt, as long as they don't do it again later in the summer) and ate all the bloom possibilities off four plants of Hydrangea paniculata 'Limelight'.  Mercifully, I had a couple of Annabelles and one Limelight moved to the farm inside a deer fence.  I knew it was a matter of time until they got to the toad lilies.  Half of them are gone.

Amazingly, the deer don't bother (or haven't yet) the Hydrangea macrophyllas.  They have eaten the giant blossoms of H. quercifolia 'Snowflake', but they've left the big blooms at the back of the plant alone.  I'd better get my camera up there in a hurry if I want to capture those oversized flowers.

I took this photo a couple of years ago on the American Hydrangea Society's tour.  There were lots of hydrangeas in this garden and some good ideas, as well.  I'll be passing some more along soon.