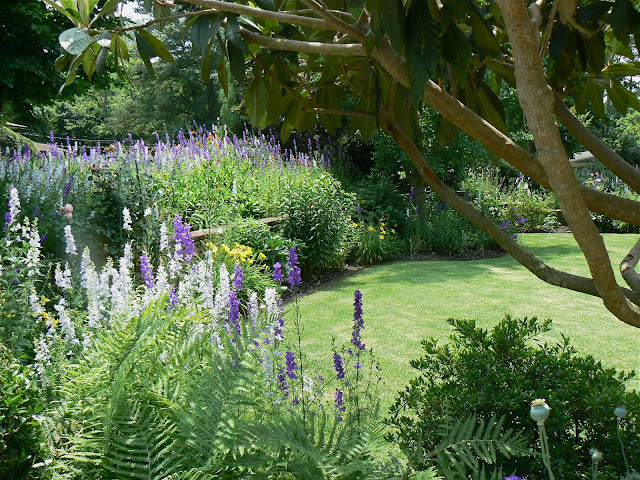 Yesterday, I was a little early to meet some friends for lunch and decided to turn onto the street where Bob Clinard lives, as it was just around the corner from my destination.

I never know what I'll find at Bob's.  Two weeks ago, I would have seen his roses in bloom and a gazillion red poppies.  But, the faded roses - all but a handful - had been deadheaded, and the poppies had been pulled up or left as seed pods.  What I did find was a sea of larkspur next to the street and traveling down into the borders around his neat-as-a-pin lawn.

I wrote about Bob years ago when he planted and maintained a garden next to an antiques store.  That garden was near a major intersection.  People were constantly pulling over and looking at the flowers.  He had gorgeous roses back then, too, and later in the summer grew sunflowers and zinnias.  There was always something colorful going on, well into fall.

Bob now lives on a quiet cul-de-sac and works at the airport in one of those lounges where first and business class flyers go to wait to board.  I always think of the episode on Friends where Monica and Chandler were flying out for their honeymoon.  The couple in front of them revealed to the agent that they were newlyweds and were given an upgrade to first class.  When Monica and Chandler asked for the same treatment, they were turned down.  The other couple proceeded to one of those exclusive lounges and were welcomed in.  When Monica and Chandler tried to sneak in, they were kicked out.  I think I tried this once - I can't even remember the circumstances because I usually don't have enough nerve to do things like that.  I, too, was turned away.

Anyway, Bob works in one of those lounges for the lucky few.  Maybe he'll let me come visit him one of these days.

Yesterday, I got out of the car and started snapping pictures.  I could hear a dog barking, but I figured Bob was at work.  Finally, he yelled out the door that he'd be right out.  He had recognized me, and fortunately is always very welcoming.  Of course, he said I should have been there two weeks ago, but I thought the larkspur extravaganza was breathtaking.  Bob keeps his garden so clean that everything seemed fresh and beautifully groomed.

Bob obtained the larkspur seeds from an across-the-street neighbor who is now deceased.  His red Flanders Field poppies also came from that same source.  Bob said that just about every neighbor on the street is in his or her late eighties or nineties.  He helps do some lawn care for several of them.  I joked that I thought this was a good street to be on, that maybe some of those genes will rub off on him.

Bob grows a lot of things from seed, so I left with a tropical plant (will have to wait to see what it is; the seedling is about to pop out and is very sturdy) and a fatsia he'd potted up.  I hope the deer don't like the latter.  I never know.

The photograph above shows a loquat tree Bob has trimmed up (most of these trees disappeared from Atlanta after the freezes of the early 1980's) and a view into the front yard, which is a few feet below street level.  The yellow daylily already in bloom is 'Moon Traveler'.  It was very difficult to choose among the photographs I took.  I also went into the back yard, where there is a lovely hosta garden and a koi pond with some of the biggest specimens I've ever seen.

All in all, my snap decision to turn onto Bob's street was a good one.  The only thing was, I was late for lunch.  I tried to make my friends understand that I had actually been early, but, I'm sorry to say, my explanation didn't go over very well.