Lyndy and the queen of climbers 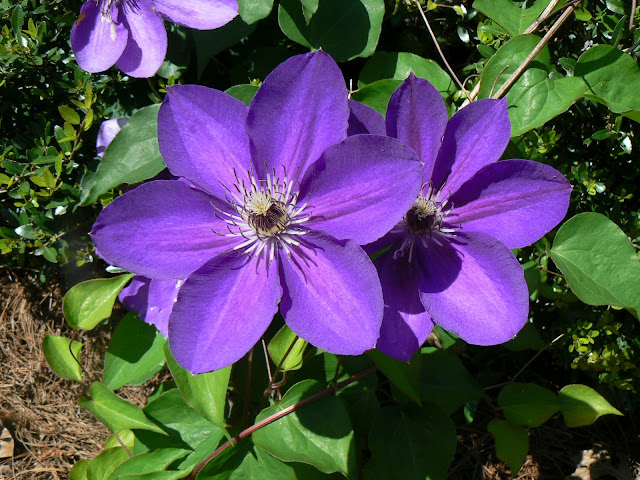 When I left Lyndy Broder's incredible garden the other day, I had 158 new photographs and about six new chigger bites (when I was growing up, my brother used to get them, and I would sort of gloat that I never did; now I'm being punished; they love me and find a way to get to me even though I am always covered up).

But back to Lyndy.  I found her laying sod all by herself, cutting the edges to make large curving swaths throughout her expansive back garden.  This might not seem so extraordinary until you see the size of the garden and learn that she has planted every tree, shrub, vine, perennial and bulb on the three acres she's cultivated.  There are thousands of specimen plants, many very rare.  Going through her garden is like visiting a botanical garden.  I can't think of many plants she doesn't have.  There's something in bloom all year long.

Lyndy started her garden after a full time career in community mental health and raising four children.  In 1997 she finally retired from her job; in 1998 she completed the Master Gardener's course, and "the obsession began".  She quickly became one of the Atlanta region's most knowledgeable gardeners and began assembling a huge collection of plants.

Although I took photographs of various blooming shrubs and climbing roses and a rare tree I'd seen only once before, most of my attention was concentrated on Lyndy's famous clematis collection, which she has been amassing in recent years.  Lyndy is active in the International Clematis Society and has traveled all over the world to study this "Queen of Climbers".  I was there to catch the large-flowering types, which scramble up through shrubs or cover tuteurs or grow at the base of trees.  It was like being in a candy store.  You'd look at one and think it was the most beautiful flower you'd ever seen, only to move a few feet and find one just as phenomenal.

In addition to visiting gardens and nurseries in Australia, New Zealand, South Africa, Europe, England, Ireland and Japan, Lyndy's pursuit of clematis has taken her to places like Finland and Estonia seeking out hybridizers.  One of her most memorable trips was to Poland where she met the late Brother Stefan Franczak, a Jesuit monk who began hybridizing clematis in the 1960's and introduced some of the world's most beautiful clematis.

"He was so humble," says Lyndy.  "Just imagine, for years, no one knew of him.  All that time, he was quietly hybridizing clematis behind the Iron Curtain."

Lyndy is partial to blue clematis, although she has every color ranging from stunning reds to deep purples to pure whites. Choosing a photograph to feature was difficult.  I wanted to show every one she had.  The above cultivar, 'Yaichi', was hybridized in Japan.  I loved Lyndy's favorite 'Arabella', which weaves through beds all over the garden with charming, light blue flowers.  I also was taken with Brother Stefan's nearly black 'Syrena' and the velvety bright red, 'Bourbon' (great for patio containers, according to Lyndy), from the famed clematis hybridizer from the Isle of Guernsey, Raymond Evison.  And then there was 'Rhapsody', an intense blue beauty from England, and on and on.

Down the road, I'll post more of Lyndy's clematis.  She also has many species clematis, some of them from the U.S.  In the meantime, to see many of the clematis Lyndy grows, go to gardenvines.com, Brushwood Nursery's Web site.
Posted by Martha Smith Tate at 8:11 AM