It's okay to keep it simple 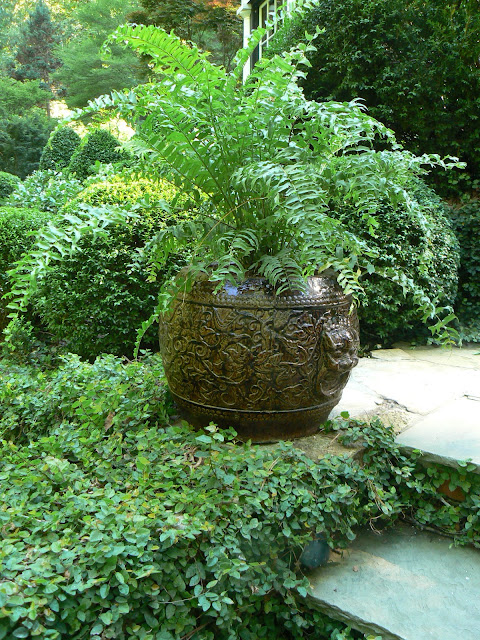 When I first started gardening, I thought that when it came to container gardening I had to cram in as many plants as possible in all different colors and textures.  I still like that look, but I eventually figured out that having one good plant makes an impact, as well.  Sometimes, that's all you need.

On a trip to Brooklyn, N. Y., last weekend, my daughter and I were walking down a lovely shaded street when we came upon two stone planters sitting on the sidewalk.  Each held one big, beautiful hosta - green with yellow margins and huge leaves.  My photographs didn't do the plants justice, so I'm not using them here.  Suffice it to say that the hostas looked beautiful and were a good choice for the conditions on the street.

The exquisite container above is yet another one of Bill Hudgins' lovely imports from Asia.  I don't know what the fern is - maybe a tropical one - but it is spectacular and just right for this pot.

When I returned home Monday night, I went out onto the terrace (that sounds pretentious - I usually say "concrete deck") to check a water gauge (we finally had some rain on Sunday; it was a shame that it was the second day of the big garden tour here), I noticed several pieces of white styrofoam lying about.  I was puzzled.

The next morning, I saw that some creature had dug up a large Japanese holly that I had cut into a ball (I have three of them in matching pots to provide some green back there; I use the styrofoam for filler so I don't need as much soil).  Last year there was a yellow jacket nest down in that particular container, so it didn't get a lot of attention.  I can't imagine who has totally dug out all the fillers I had in there (it's a huge pot).  And why did they just choose that one?  It's going to be quite a chore to put the styrofoam back and fill in with new soil.  This was too much work for the chipmunks or squirrels, I think, and they've never dug out there before (although someone ate my Black Seeded Simpson lettuce plants two years in a row; I've given up on that).

I've gotten off the subject here.  What I'd like to say is that I now have several very large containers with just one plant apiece.  There are two 'Emerald' arborvitae and some 'Winter Gem' boxwoods, in addition to the three holly "balls".  So, when I add the dark purple, velvety petunias I like, it's going to look nice.  I also have a peegee hydrangea back there ('Silver Dollar'), and its white blooms go well with the green and purple.  I need to plant my moon vine seeds (what have I done with them?), along with some basil, and I'll just leave it at that.  Next year, I'm going to get an early start and have some of those mixed containers with lots of flowers and interesting foliage.  For this year, with all that's going on, I'll just have to keep it simple.