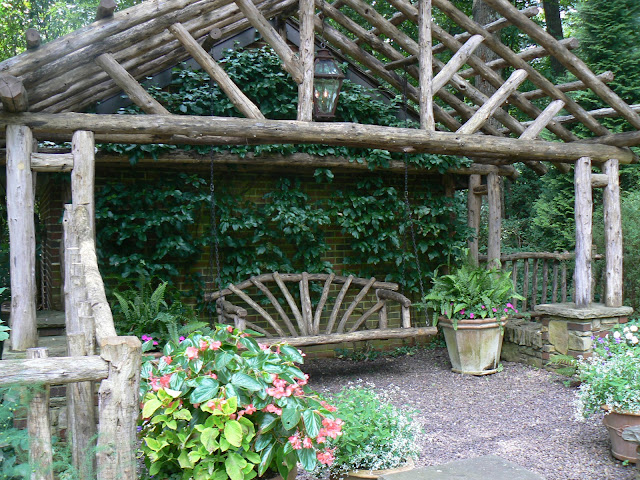 This doesn't look a thing like the garden swing I had as a child.  Ours was mounted on the metal poles of a worn-out swing set.  It was located in what we called the "big lawn" (as opposed to the little lawn directly in front of our house) under a water oak tree.

It wasn't often that my mother and I would go there and swing, but when we did, it was sublime.  She would hum her favorite hymns, sometimes singing the words, but mostly not.  The air would be soft and sweet, like you would expect on a summer evening in childhood.  It would not be dark yet, but in the ebbing light, you would see the fireflies twinkle here and there (actually, we unpoetically called them "lightening bugs").

When we moved from our home place when I was 18 years old, Mother insisted we have a swing at the farm.  It was never the same.  Of course, I was older, and it was my brother's children who got to experience the moments with my busy mother.  Also, the shade wasn't the same under a black walnut tree.  It would have been different if all the American elms which were growing at the farm had survived, but they all succumbed to the Dutch elm disease.  One would come up and grow almost to maturity, and then it would die.

But back to a swing.  I'm not sure how comfortable the one above is, but it is attractive in its setting.  There used to be a swing on the porch of the little house here in Atlanta.  It must have rotted or fallen victim to the merciless onslaught of carpenter bees.

Soon, I'll be renting that little cottage out, but before I do, I hope to find a good, sturdy swing for the porch.  There's nothing quite like sitting there in the waning light, thinking of times long ago, next to your mother, when you knew everything was going to be okay.