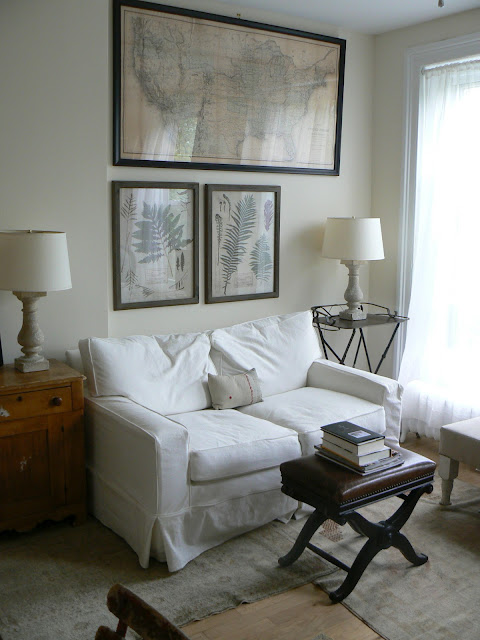 If I'd thought of it, I'd have bought some flowers from a fabulous shop near my daughter's new apartment in Cobble Hill in Brooklyn.  That might have legitimized this as a "gardenphotooftheday" entry.  I went to New York over Mother's Day weekend, and we had perfect weather.  As we were walking down the street late on Saturday, a very chic flower shop had buckets of hydrangeas and peonies and big bunches of billowy David Austin roses.  The inventory was  pretty much cleaned out, but the leftovers looked fabulous.  I wish we'd looked in earlier.

I'm taking license here by counting the botanical prints we bought in Charleston, S.C., (my daughter lived there after journalism school) as something gardeny.  Still, it's fun to analyze what's in this view.  This is, of course, a small space - very small, in fact.  But, at least in this apartment, there's a place for several people to sit and have a conversation without having to perch on the side of her bed.  That was the case in the previous studio apartment in the attic of a brownstone in Park Slope.  Still, she had to use a lot of restraint and give up some items that just wouldn't fit here.

I was eager to show the whole room, but I couldn't get a good angle.  Here is a love seat she just bought.  She's still thinking a bigger sofa would have been a better choice.  I don't agree.  There's a Swedish type arm chair to the left, and a larger fauteuil with ottoman on the right.  You can just see the tip of a padded coffee table she bought from a friend.  It holds the T.V. and a big round silver tray we got from John Derian's shop in the East Village.  The little leather stool was a close-out I picked up at Restoration Hardware, just before they went through the change that has them sending me an e-mail every single day (I was an early victim of their new look, I confess).

The little pine chest on the left came from my mother-in-law's upstairs bath.  When my other daughter was little, she decorated the piece with stickers.  Unfortunately, some vestiges are still on there.  The French iron stand on the right came from Anthropologie.  This was years ago.  I walked into the Atlanta store, and they had at least a dozen of these for $38 each - half off.  Why didn't I buy them all?  I only got two.  That mistake will always haunt me.  I could have given them for wedding presents or parceled them out over the years.  Oh well.

The balustrade lamps are from a shop in Charleston.  My daughter called and was agonizing over them.  They were too expensive, she said, but were a good size.  "Get them," I said.  "You'll regret it later if you don't."  I am a bad regretter of things I didn't buy, as you can probably tell.

The very faded rugs are from Scott's Antique Market, which happens the second weekend every month in Atlanta.  I bought four for my daughter.  One you can't see, and the other is in her office at Simon & Schuster and looks really good.

That antique map of the United States was in my late husband's law office.  In the lower left hand corner of the photo, just barely visible, is an iron and faded wooden French cafe chair.  It goes with a metal table (red, but that's okay), also from John Derian's shop, bought when my daughter lived in the West Village.

This deconstruction came about because I couldn't make a decision about all the pictures of hydrangeas I took in Harriet Kirkpatrick's fabulous garden yesterday.  I'll save them for next week, when it's not a holiday.  I may have to show some more of my daughter's apartment at some point.  I love her bookcase and writing table and the objects she's put around that are subtle, but interesting.