All quiet on Wisteria Lane* 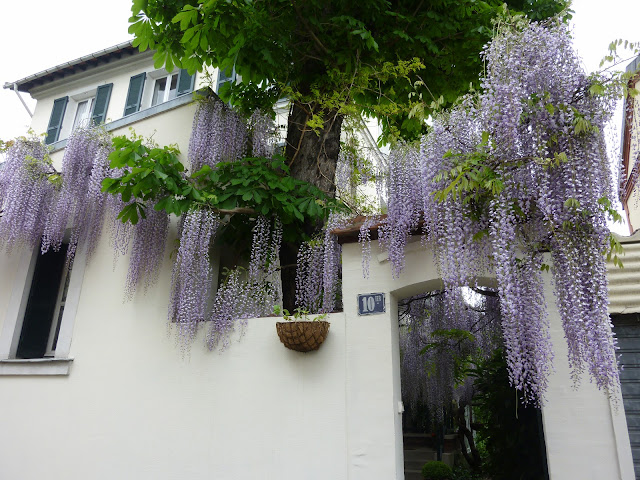 Yesterday, you saw the disaster that happened inside Carol Tessier's courtyard entrance in Asnieres, just on the outskirts of Paris.  It looked like a wisteria explosion.  Here's a tamer view that shows how amazingly long the chains of flowers are on this selection.  This view from the street was taken after the clean-up, and if you'll look through the door, you can see that the canopy over the courtyard is breathtaking.

Many of you who live here in Georgia know the Asian wisteria as a thug and although not as widespread as kudzu, has become a rampant and very strong beast of a plant (we do have the very desirable native Wisteria frutescens that behaves, but blooms later with shorter flower chains).  When I first moved to this property, I was enchanted by the purple fairyland that appeared overhead in early April.  Soon, I realized that this is one of the toughest vines to get rid of and a formidable enemy.  After it roots and grows to over a few inches tall, it's impossible to pull up.  In late winter, the velvety pods explode and then fall, throwing the smooth brown seeds in all directions and making them hard to find if there's a ground cover.

But, I haven't seen any wisteria around here with chains this long.  I did order four plants of the white version after I saw it in a California garden.  I ended up selling the plants to an acquaintance who desperately wanted them.  This was years and years ago.  He moved away, so I don't know how the plants fared in Georgia's climate and if they had the long chains like the ones in Marin County, California.  I can imagine, though, that the wooden trellis he had built over his patio was no match for mature wisteria vines, so I doubt anything good came out of it.

A neighbor of Carol's sent her a photograph of all the wisterias on their street.  They were all lovely, but Carol's was the prettiest and by far had the longest chains.  Wisteria is a high maintenance vine, but for the beauty it brings during this season in Paris, I believe it's well worth the trouble.

* Wisteria Lane is the name of the street in the TV series Desperate Housewives, so people outside the U.S. or who haven't watched the show (I never got hooked, but my younger daughter was a fan) won't recognize the reference.