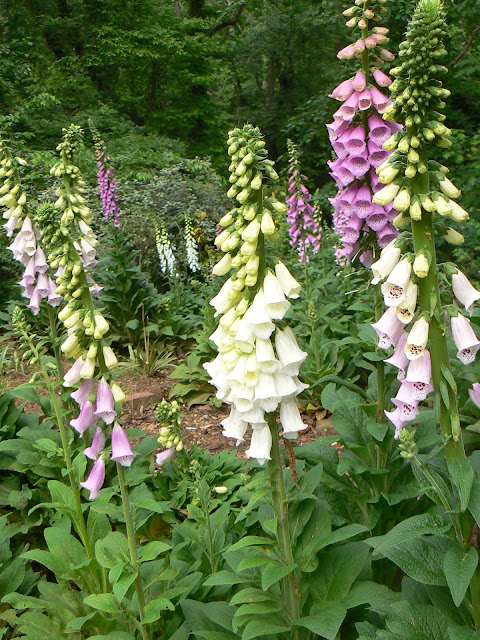 I've forgotten what year it was - maybe 2007 - that I took all the millions (well, it seemed like that many) of tiny foxglove seeds I had bagged up and scattered them over some ground I'd cleared.  Nothing ever happened.

Then, last June, I began to see them coming up, little tufts of fuzzy leaves.  I'd had a few foxgloves pop up almost every year in another area, and I began seeing lots of babies there, as well - way more than usual.

So, I'm wondering what it was that all of a sudden I had foxgloves, long after having given up on ever seeing any from the many seeds I had cast about.   Those seeds had been lying dormant for years.  Maybe there was just the right amount of rain last year at the right time.  I do remember now that I lost many of the seedlings when the oak tree fell on the little house on June 28, 2011.  That meant that the plants were well on their way by that time.

Today, just for fun, I picked winners in several different categories.  There was the biggest, thickest overall - a chunky stalk with giant magenta bells with white spots.  The flowers were jam packed on the thick stem.  Not so pretty, but by far the most robust looking.  I also chose the best white and the best pale pink.  A dark pink one won for the tallest.

Biennials are tricky, perhaps.  Who knows why these foxgloves finally appeared as tiny plants last year and grew into magnificent flowers?  I once bought some foxglove plants in October from someone in the Market Bulletin.  They grew into giant flowers, with some stalks reaching seven feet tall.  I saved the seeds and scattered them, but nothing came up the next year.  My present crop is modest in height, but each plant is fascinating.  This year, I'll try the seeds again and see what happens.
Posted by Martha Smith Tate at 7:02 PM