Thou shalt not covet thy neighbor's birdbath 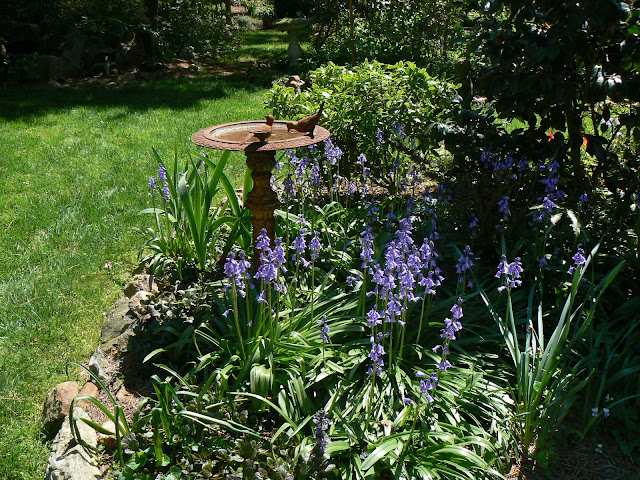 Another story about my late mother-in-law.  I think I've said how incredibly gorgeous she was, and how, even in her 80's, she would walk into a room, and every eye would turn in her direction.  Part of it was just sheer good looks, but she had style and fabulous taste and wore clothes beautifully.

One time, when she came here to visit, she had some great-looking earrings that I'd never seen before.  I complimented her on them, and the next day she wore them again.  Once more, I made a fuss over the earrings.  Finally, on the third day, she appeared with the earrings, and I went on again about them.  All of a sudden, she snapped them off and thrust them in my hands.  "Here, if you love them so, I want you to have them."

I was so embarrassed.  I had definitely crossed a line in my compliments and must have sounded like I wanted to have them for myself.  I bring this up, because Margaret Moseley and I have a joke about the rusty birdbath pictured above.  I have photographed it many times throughout the seasons and am always saying how great it looks with so many different types of plants.  One day, I was going on about the birdbath for the umpteeth time, and Margaret said, "Why don't you take it, since you love it so?"

I told Margaret about my mother-in-law's earrings (which I did not accept), and she started laughing.  So, now, every time I show her a photo of the bird bath, we get tickled.  "There's your birdbath," she will say.

But, the reason I'm posting this photograph today is not about our joke.  The picture was taken on April 17, 2009.  Today is April 17th, and if I were in Margaret's garden taking pictures, this scene would be very different.  The tall scillas you see have been spent for at least a month or more.  Like so many other spring plants, they bloomed way early.  In fact, Margaret and I were talking today, and she said she'd seen early springs before, but nothing like this.  "You'd have warm spells, but things would eventually even out.  Not this year," she said.

So, we'll see how this all plays out next spring for comparison.   Meanwhile, I'm going to try to avoid talking about the birdbath.  Since the thing weighs a ton, it's safe to say I won't be walking away with it.  However, that doesn't mean that I won't be coveting it in secret.
Posted by Martha Smith Tate at 3:46 PM