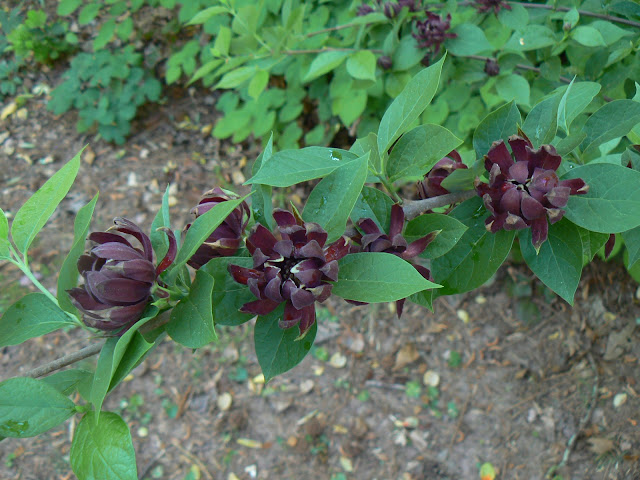 I was walking down a street near my church in Atlanta when all of a sudden a sweet scent wafted through the April day.  There was a patch of woods, and I knew that somewhere in there was a sweet shrub, Calycanthus floridus.

This is a fragrance I know from my childhood.  We had a cabin on a lake out in the country.  We swam a lot off the dock, and sat on the porch and watched to see when our friends from Atlanta arrived at their place across the lake.  While my daddy, mother and brother enjoyed fishing, I did not.  Well, that's not exactly true.  I only liked it if the fish were biting and if only a minute or two passed between each tug on the line.

What I liked to do was walk around the lake, a trek of at least a mile, if not longer.   Along the way, there were all these outcroppings of granite rock.  It was fun to climb on them.  We had one outside our cabin where water had washed niches in the stone.  My older brother told me that Native Americans had lived on this rock and that the worn down areas were the sink, the stove, etc.  It made no sense, but I believed it until way after I should have.

During the month of April, there were certain areas I would pass when the special fruity fragrance of sweet shrub wafted through the air.  I would then cut into the woods to find the burgundy flowers and break a couple off to take with me along the way.

So, the day I took the above photograph in Ozzie Johnson's garden, I caught the scent before I saw the shrub.  This particular plant is very special, as it is one Ozzie hybridized to obtain bigger flowers.  He is also working on a variation of 'Hartlage Wine', the N.C. State hybrid of Sinocalycanthus chinensis and C. floridus.

But, I'll always love the native species, too, even with its much smaller, dark flowers.  It fascinated me as a child and these days, that scent, like no other, brings back memories of the lake, of family and friends and huge rocks where you could spend hours pretending you lived in another place and time.
Posted by Martha Smith Tate at 7:44 PM