The surest way to the front door 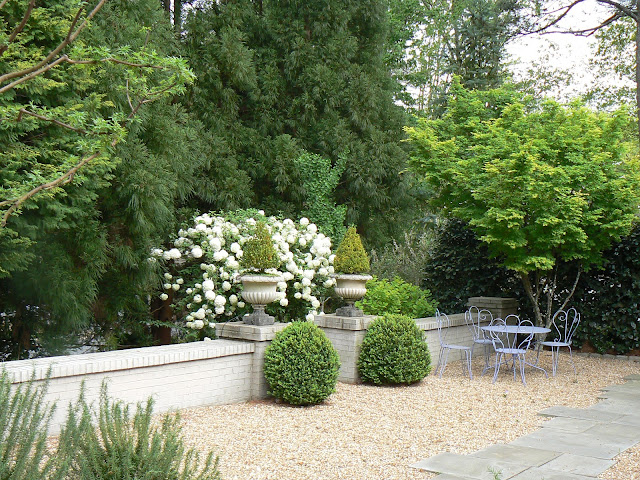 Does this ever happen to you?

You pull up to a house and park.  You haven't been there before, and you consider your choices about where to go.  You're closest to carport side entrance which the family obviously uses.  Then, you look, and going around to the front of the house is a sidewalk.  Somehow, it looks like it's seldom used.  What to do?

Several months ago, I ran across something on the Internet, and now I can't remember where I saw it.
Anyway, I  I laughed out loud when I read about the famous French film maker and comedic actor Jacques Tati in a scene from Mon Oncle (which I saw more than 40 years ago!).  He was trying to get from the street to the front door of an ultra modern house.  The "path" consisted of round concrete pads that were neither set in a direct line nor at the right distance for stepping.  The result was that Monsieur Hulot (Tati) started leaping from one stone to the next, each time losing his balance and almost falling into the forbidden grass.  The path, instead of a comfortable and direct way to the front door, was like negotiating a minefield.

I remember when it was all the fashion for designers who, instead of allowing a "boring" straight line from the sidewalk to the front door, were leading visitors on a curving, over planted path, I assume, just to be different.  How many times have I seen examples of having to walk around in an unnatural fashion to arrive at the door.  My church has at least two glaring examples.

My friend Mary Wayne Dixon, whose garden will be on the Atlanta Botanical Garden's Gardens for Connoisseurs tour this year, solved the dilemma of which way to go from the parking lot in a very attractive way that avoids confusion.  And, by creating a front garden that is inviting and which has an obvious path, she also drastically changed the look of her house.  Now, once you step into her front courtyard, you feel like you're in Europe.  Also, you know exactly where to go.

The scene you see above used to be a typical, sloping lawn to the street.  A retaining wall was built and filled in to reach the level of the front door.  Monsieur Hulot could have easily negotiated the wide slate path from the side parking lot to the door.  If he lost his balance, he would only fall onto gravel that is flush with the path.

What you can't see is the iron arch which directs you from your car to the proper entrance that leads to the front door (one can drive around to the back, as the family does, but you don't see that option).

Where grass once grew on the sloping front lawn, cryptomerias and hollies are planted to screen the garden from the street.  The other day when I stopped by, the Kwanzan cherry trees were in bloom, with the puffy pink blossoms hanging over part of the courtyard.

To see the front door of this house, go to the post of Wednesday, September 21, 2011.  It's entitled "Changing the mood".  I took that photograph when the yellow Lady Banks rose was in bloom, as it was last week.  To see the garden in back, tune in tomorrow.
Posted by Martha Smith Tate at 1:14 PM