The subject is roses. But what is it? 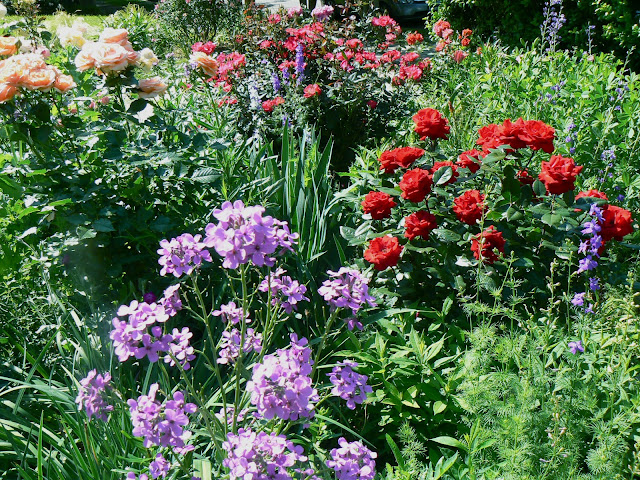 Once again we're in Diana Mendes' garden, and before we change into a different flush of bloom, I wanted to see if there's someone out there who can identify the red rose on the right of the photograph.

Here are the statistics:  First of all, it is a very compact grower.  The flowers are huge, so it's of course not a miniature, but it is much shorter than all the other rose bushes Diana has.  The color of the very double flower which measures at least five inches across is bright lipstick red.

The foliage is exceptionally clean and stays that way all season long.  Diana says it is a repeat bloomer, with sporadic flowers during the summer and another healthy flush in October.  I have a close-up of this same rose taken at the end of October last year, and the flower is huge and perfect, and the foliage is clean and healthy.

Last fall, we were lucky that someone recognized Diana's Rosa 'Cinco de Mayo'.  Now, if we can just get an identification on this one.  Tomorrow, I'll run a different view to see if anyone recognizes it.

Meanwhile, note the sweet rocket (Hesperis matronalis; a.k.a. dame's rocket) in the foreground.  This flower is invasive in some states and actually banned in Connecticut, Massachusetts and Colorado. Here in Georgia, it is not a problem.  I love its sweet scent and the impact it makes with the other April-May flowers.

A sideline about the above.  I used to have this plant, which I bought from a nursery.  It is a biennial or short lived perennial, and it didn't come back the next year.  One year, long after I'd had the other plant, I noticed a rosette of leaves in a container on the back terrace.  The foliage was there all winter.  As April progressed, I wanted to plant something else in the pot, so I yanked it out.

Then, I noticed there was an identical clump up at the little house.  This one I left alone.  Soon, a stalk started up, and then I realized what I had done.  This was hesperis, not a weed.  I was sick that I hadn't left the other one.

This happened years ago, and I never had another flower come up.  Now that I've seen it in Diana's garden and noticed that it's all over Monet's garden at Giverny, I want to try it again.  This time I'll know what it looks like and won't pull it up.
Posted by Martha Smith Tate at 4:29 PM