Green is my favorite color 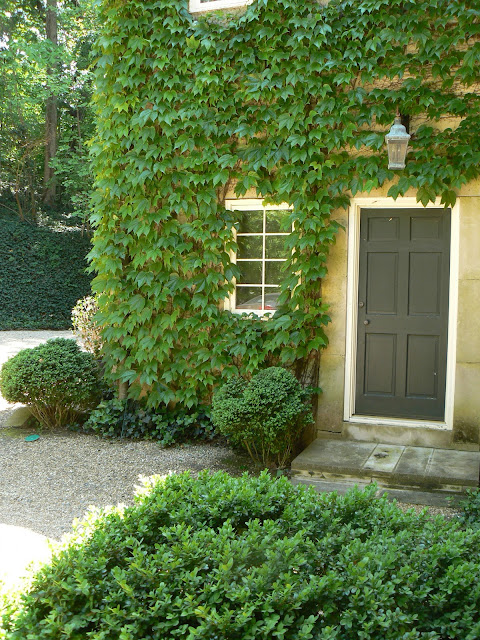 After rushing around for three weeks, with the last three days spent decorating the church for Easter, I arrived home Sunday afternoon, and while I was unlocking the front door looked over at the most soothing sight - green.  I had camera in hand, so I put everything down, pointed over to the side door and snapped this picture.

That's one of two boxwoods that flank the front door in the foreground.  The other two - I forget to trim them so they'll green up all the way to the ground - are from the same batch that came from my mother-in-law's garden in Virginia.  She and her husband had tons of them, and she had rooted these for her son.  My husband and I borrowed my daddy's white truck (medium sized) and drove to Salem, Va., after he got off work to get the boxwood.

I'll never forget the scene.  We got there in the wee hours of the morning, and my mother-in-law met us at the door.  She didn't know me all that well, I guess.  She was drop dead gorgeous and she was not the sort who would ride for eight hours in a dump truck.  I had on mustard colored pants and a white and brown and mustard colored top.  Nowadays, I am aware that this was a color that made me look like a zombie, but back then, I bought the outfit, which was too matched, thinking it would be very serviceable.

When my mother-in-law came to the door, she literally started at my feet (canvas espadrilles) and stared all the way to my hair, which couldn't have looked good.  I'll never forget how that felt (not good).   Even though I had bought the outfit at Saks Fifth Avenue, I never wore it again.

I don't remember how long we stayed, but we drove home with a truck bed full of English boxwoods of various sizes.  The best two went next to the front door, and the others I heeled in down in the woods.  Many of them are still there, waiting for a permanent home.  Let's see.  This would have been in the 1970's, but I am eyeing them now to anchor a couple of new garden spaces.  They will be moved in the near future.

So, that's the story behind the boxwoods.  I've already explained in an earlier post that I first saw Parthenocissus tricuspidata in France.  I plucked a huge leaf off a restaurant wall in the Perigord, hoping to bring it back to see if I could get it identified.  The leaf shriveled, of course, but it wasn't long until I saw the vine in an old black and white book that identified it.  Here in the U.S., we call it Boston ivy.  That's funny, because it is definitely native to China and Japan.

It wasn't long after we built this house that I was able to buy some Boston ivy plants from Wayside Gardens (by the way, that's where I learned about a lot of plants, by looking at the pictures and reading the explanations in their catalog).  I now have to keep the vine trimmed back pretty often during the growing season.  No, it's not like English ivy.  It won't destroy a surface.  Non-vine people are always scolding me for having it, saying it breeds insects or will destroy my stucco walls.  Even if that were true, I'd still grow it because I love the way it looks in April, May and June.  By the third weeks of June, you walk out the door, and the sound of bees buzzing around the new berries is deafening.  After that, the vine doesn't look as fresh, and by September, it is positively ratty.

But here I was, on Easter Day 2012, liking what I saw - the vine I wanted so much and the boxwoods that mean a lot to me, despite the fact they remind me of my mother-in-law's obvious appraisal of my outfit.  I love all the green, which is my favorite color, and I don't mind that there's not a flower in sight.


Note to self:  Have the threshold on that door painted a dark color.  A workman painted it all cream colored, and it looks funny.  Also, pressure wash the limestone this year, and find a stone ball to camouflage the Sentricon disk.
Posted by Martha Smith Tate at 6:48 PM