Yes, we do have wild azaleas 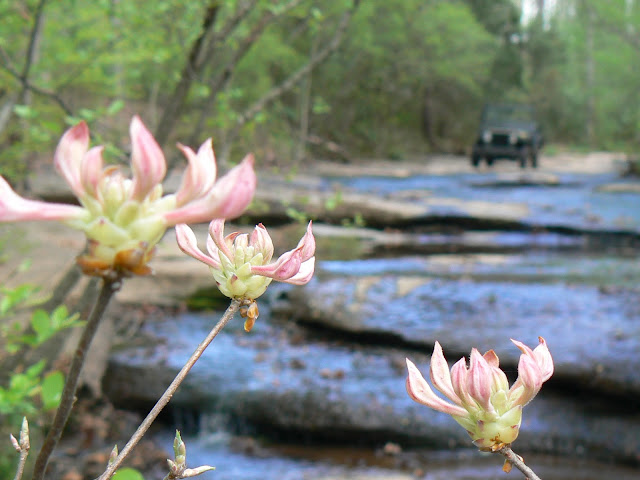 Before we started out on Sunday, Richard Grace, who is an expert on vintage military jeeps, asked if there were any wild azaleas on the farm.

No, I said.  I went on to explain that I was surprised there aren't more native flowers besides the buckeyes that are all through the woods.  There had been a tiny patch of bloodroot on a hill, but it's been years since I've seen any evidence of the plants.  I would think there would be trilliums and trout lilies, but I've never seen any of those, either.  In late summer, there is a lone cardinal flower (Lobelia cardinalis) by the creek, and I've also seen a fire pink (Silene virginica), but that's about it.  Oh, and an Itea virginica along the creek, but I believe that's no longer there.  I'll know later on in April.

After stopping at the wild Easter lilies, we started across the wide shoals.  I looked down toward the property line and saw a mass of light pink.  Stop, I yelled.  I jumped out and went sloshing down the creek with my heart beating wildly, and there they were.  One on each side of the water.  I'm almost sure this is the Piedmont azalea (Rhododendron canescens), although I didn't detect any fragrance.

What you see above are the thick buds that will open up into orchid-like blooms of pink and white that look like honeysuckle on steroids.  I chose this photograph so you could see the wide shoals and the 1950 jeep in the background.  Those buds may be open this weekend.  I'll be sure to go and see.

One word about the location.  I've mentioned that I used to go all around the farm, starting when I was 12.  These shoals were a favorite spot, with wide flat surfaces that stepped down with tiny waterfalls.  Through the years, family and friends have had cookouts and picnics down there.  It is a magical place, spoiled only if the flight pattern into Hartsfield-Jackson happens to be overhead.

To get to where the azalea was on the near bank, I had to pass over a place that still gives me chills.  Once, as my fellow 12-year-old friends, Mary Alice Langley and Linda Jackson and I were making our way through the craggy, misshapen trees along the water, I almost stepped on what I thought was a huge dark, thick snake coiled next to a tree stump.  I screamed, and the three of us ran a mile without stopping, through the fields and back up to the old, abandoned farmhouse where I had parked the jeep.

I had recounted the story countless times and always insisted that it was a giant water moccasin.  When I told Richard, the jeep owner, who knows all about snakes, he said that was impossible, that there aren't any in this part of Georgia.

I don't know what I saw that day; if it was a snake, it wasn't a skinny one.  It was years before I dared climb to the same spot.  Then, when I finally did, I wasn't even sure where it was.  I think the stump had rotted.

Nevertheless, I was cautious last Sunday, as I had to climb up and over the place to get to the exquisite pink blooms.  You can bet I was looking down the entire time.  One can never be too careful.  An errant water moccasin could have lost his way, like the one must have done so many years ago.

Note to native azalea experts:  Could this be Rhododendron arborescens in this area?  I am sure it was not a flame azalea of any kind.  I'll check again this weekend to see if I detect any fragrance.  I'm pretty convinced it is R. canescens.
Posted by Martha Smith Tate at 6:53 AM