A wild ride to the wild Easter lilies 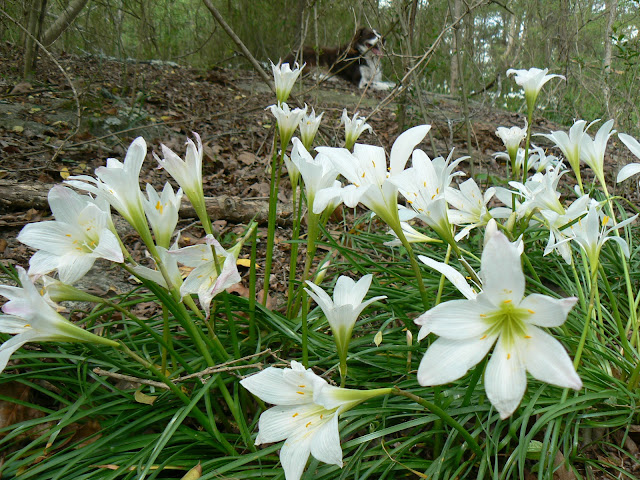 I was twelve years old when my parents bought a farm outside our little town.  At the time, Daddy had an old Air Force jeep, which is the vehicle I learned to drive on.  In small towns, we took to the roads early, and by the time I was 13, I had already burned out a clutch on the "three in the floor", navy blue jeep.  One of my favorite pastimes was to gather a load of friends and bounce them all over the place as I went way too fast over the fields and splashed through the rocky shoals at the farm.  The highlight was to dump everyone into the pasture and have them run for their lives from Pudgy the fierce bull.  Sort of an early prequel to The Hunger Games.

Fast forward, um, several decades.  I am back on a beautiful Sunday afternoon (yesterday) in a 1950 Marine Corps surplus jeep, driven with a good bit of bouncing by my older brother's childhood buddy Richard Grace.  He is the go-to person for military jeeps in the U.S.  Once again, I'm riding on the outskirts of the familiar fields and through narrow trails underneath oaks and beeches and pines, and, sorry to say, a lot of sweet gum trees.

But yesterday, there was a mission.  Last spring, as Richard and I were looking for deer trails (I was determined to find some antlers that had been shed; no luck), we came across a huge expanse of granite.  It had been a wet spring, and the mossy top was saturated.  The moment I looked and saw huge patches of narrow glossy leaves, I knew what I'd stumbled upon - Atamasco lilies, or Zephyranthes atamasco.

But it was too early.  There was only foliage.  Time passed, and by the time we rode the jeep to the site, there was one white lily left.  At least I knew.

On Friday, Richard called to tell me he had been to the granite outcropping, and there were hundreds of lilies in bloom.  I said I'd be down on Sunday, although it was going to be hard to wait.

At last, we made our way through Sweet Gum Circle and up to Arrowhead Hill, where we have found pottery shards and arrowheads, and then back down to enter the narrow paths of Kudzu Tangle.  Finally, after changing gears and climbing up a hill where you have to duck or get hit by a branch, I could see them in the distance.

I had chills. It is so thrilling to find native flowers in the wild.  I was bedazzled by the sight and spent a half-hour taking pictures of the all the clumps and many single flowers.  The lilies are pure white and about 12 to 15 inches tall on rather slender stems.  The older ones have a pinkish cast.  There were still some buds, so we hit it just about right.

The only disappointment was the existence of foreign invaders like privet and honeysuckle.  I also clipped some vicious thorns from the middle of several of the clumps.  I'm going to work on ridding the area of these obnoxious interlopers.  Still, their presence didn't take away from the wonder of observing these members of the amaryllis family, hidden in the woods.  I've heard them called wild Easter lilies and also Dead Soldier lilies.  I need to contact my friend who told me about the latter common name.  This means that hers are in bloom, as well.  As the crow flies, she doesn't live very far away.

On the way back through another part of the farm, I discovered something else.  You'd have thought I'd found a treasure chest.  More on this later.  For the time being, I'm thrilled to have captured images of these lilies, as they will disappear later in the season.  I wonder if they were there when I nearly killed my 13-year-old friends.

The photograph above is not my best, but you can see my dog and some more lilies beyond and get an idea of how it must have been to come upon these beautiful flowers in such an inhospitable place.
Posted by Martha Smith Tate at 3:52 PM