Viburnums are just around the corner 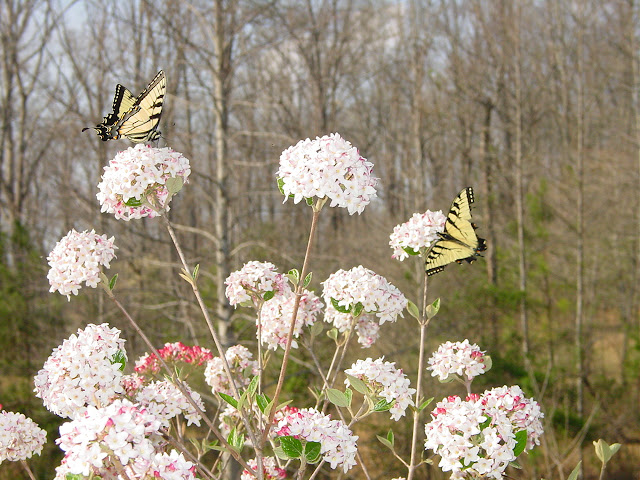 I nearly had several wrecks today driving around Atlanta.  Things are popping so fast.  I was counting on using some Lady Banks roses for something on March 28, but I don't think that's going to happen.  I could see some yellow showing already, and with temps about to stay in the 80's (!) for a while, I think they'll have bloomed out by the time I need them.

This morning, I talked with Margaret Moseley who is making amazing progress.  I'm sure it is a struggle trying to keep her indoors.  Mike Weathers, who helps her on Thursdays, says there is plenty to see in the garden.  I'm guessing that her viburnums, especially the fragrant ones, are about to bloom.  The macrocephalums are loaded this year, and today I even saw one already showing some white.  I remember when these largest of the ball-shaped viburnums were at their peak on April 21st.  It's definitely going to be earlier this year.

Pictured above is Viburnum x burkwoodii 'Mohawk'.  I'm guessing that the large red buds are really putting on a show at Margaret's right now.  I took this photograph at Wilkerson Mill Gardens with my old camera, so it had to be before 2006.  Looking at the background, you can see that the deciduous trees have not yet leafed out, leading me to think this was sometime in March.

But, for you people who know about butterflies (I think of my high school classmate, Sharyn Altman, who, I must say, looks exactly like she did umpteen years ago when we were in school), isn't it unusual to see these swallowtail (hope that's the kind) butterflies out this early?

This is one of the fragrant viburnums.  It has strong, spicy perfume.  In autumn, its foliage turns a brilliant orange-red.  I also think it's pretty hardy; Dr. Dirr writes that it has bloomed in Ithaca, New York.  'Mohawk' won the Pennsylvania Horticultural Society's Gold Medal Plant Award for 1993.

I'll give you a report on Margaret's viburnum collection in the near future.  I'm also looking forward to seeing Hugh Schutte's pink snowball, V. plicatum 'Kern's Pink'.  A few years back, the Flower Guild at church had a plant sale.  We only had a few of these sought after viburnums, and Hugh bought two.  One hasn't done well in its spot, but the other, he says, is loaded with blooms.  He has one of the few that hold their pink color.  I'm going out there to photograph his when it's in bloom.  I secretly wish I'd held one back for myself.  Maybe I'll run across one sometime soon.
Posted by Martha Smith Tate at 3:01 PM