Thinking of another time when spring came too soon 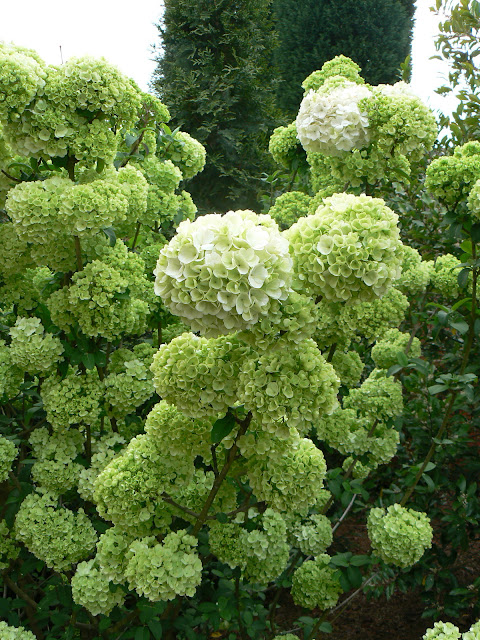 On this last day of winter, if you are anywhere in the dome of heat that is covering the middle and eastern portions of the United States, you are probably wondering, "What is going to happen to spring?"  Many of us are watching records being set, with consecutive days of 80 degree weather.

Already in Atlanta, azaleas and dogwoods are blooming - some are even at their peak.  It is an unusual year, but I'm remembering a spring when we had planned a shoot for A Gardener's Diary, and for one of the only handful of times, we had to cancel.

In the 1940's, Rhoda Ingram, who last year celebrated her 90th birthday, began planting gardens that eventually covered over 30 acres on her farm near Griffin, Georgia.  Year after year, she added dogwoods and azaleas, in addition to many other spring flowering plants, including viburnums like the one pictured above; she also had a collection of deciduous magnolias and many rare trees and shrubs.  I would go down there every year and almost faint over the extraordinary beauty of the place.

Over the decades, Rhoda had kept a good photographic diary of bloom times.  Some years, things would bloom at the same time, putting on a dazzling show.  Other years, the flowers came in succession.  But, she could pretty much rely on the dogwoods and azaleas being at their peak around April 4.

As a scout for the TV series, I was the one who set the dates for the shoots - always a gamble.  So that year, we chose April 4th and 5th.  When March came, I watched in horror as the temperatures rose, and plants bloomed prematurely.  Rhoda and I would talk, and increasingly it became clear that I had made a bad call.  By March 20th, the show was over.  I drove down to her farm on April 1st to see if anything could be salvaged.  When I arrived, I was greeted by thousands of dried brown azalea blossoms all along the boxwood-lined lanes that wove through the property.  The only color was a yellow Lady Banks rose that still had flowers, but was on its way out.  We canceled the shoot for that year.  Although it seemed like an eternity, we were able to go back a couple of years later to do an episode.

But back to the photograph above of Viburnum macrocephalum.  It was taken on April 6, 2008.  Yesterday, as I rode through a residential area of Atlanta, I saw several shrubs (some the size of small trees) already at this stage.  Others were even further along, with more white flowers than green.

My own plant is still in the apple green stage, but in two days, the blossoms have changed from dome-shaped to round.  I am hoping the flowers will be at their pure-white peak on Easter Day, which is April 8th this year.  We shall see.

Note:  A word to all those who live in zones where this plant will grow (N.C. State Arboretum says Zones 6-9):  Although I see more and more of these wonderful plants, I'd like to recommend that, if you have room, you add this to your garden.  Viburnum macrocephalum is the largest of the snowball types.  It has no fragrance, but with gorgeous big, hydrangea-like balls that sometimes measure eight inches across, I figure it doesn't need a scent (although nothing perfumes the garden like the ones that are fragrant).  V. macrocephalum is also very easy to grow.  Mine lived in a pot for years, then was planted at Kathryn MacDougald's house, then moved back here.

The first photograph I have is a slide taken in the late 1980's or early 1990's.  The date was April 21, and the sight was breathtaking - a trio of shrubs on a slope overlooking a garden pool.  I have many views of this shrub and will pick one to share with you soon.  I'll also let you know of the plant's progress.
Posted by Martha Smith Tate at 10:03 AM