Some forgotten hyacinths and pages from My Adventure Book 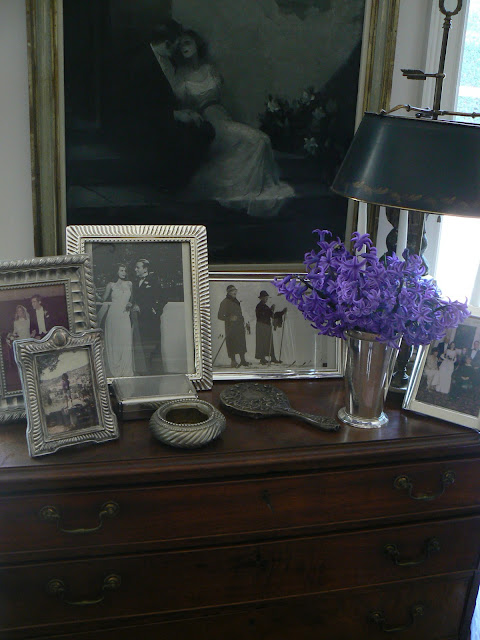 Yesterday in Sunday School, our former assistant minister taught our class.   He used the animated film Up from Pixar to illustrate his lesson.  Twice, he had us in tears, showing the love story of Carl and Ellie.  As a tomboyish girl, Ellie kept a scrapbook, which she dubbed "My Adventure Book."  The two grew up and get married and saved for a trip to South America, which they never took.  When Carl is old and Ellie has died, he looks at her book, expecting to see great dreams Ellie must have had.  But Carl discovers something.  Ellie has only put their real lives into her book.  That was her adventure.

When I snapped this picture last week of some hyacinths I picked and without much thought put in the living room, I didn't realize that pages from "My Adventure Book" were right there on the top of a mahogany chest.

First of all, I forced these hyacinths well over 30 years ago, then planted them in a place I seldom go in the woods.  Every year, I forget about them until I see their jewel-like color popping up.  I always pick them so I can enjoy the sweet scent indoors.

Next, the piece of furniture itself was bought with my retirement money from five years as a high school teacher.  I can't remember how much I received when I quit, but my husband and I rather foolishly spent every last dime on antiques.

The darkened silver mirror was a wedding present to my maternal grandmother from my grandfather.  I don't know the year - 1902, perhaps.  The engraving - my grandmother's new monogram - is exquisitely done.

The photograph on the left is my older daughter Anne at age six.  It was taken in the south of France, where we rented a house with another couple.  One magical evening on that trip, we had champagne at a hotel in Eze, high above the Mediterranean, where we watched the twinkling lights of Cap Ferrat as dark fell on the sea below.  It was my husband's 40th birthday.

There's a photo from our wedding on a hot, humid night in August 1973.  My dress had long sleeves and a high neck.  You can see my bouquet of gardenias, which ended up rather brown at the edges by the time I tossed it to the bridesmaids.

In the tall silver frame is a picture I tore from my Cole Porter Songbook.  It's of Rita Hayworth (she was so beautiful) and Fred Astaire.  This immediately recalls the many years my husband and I hosted what we called the "Old Friends Dinner" at Christmastime.  It was a mixture of his friends and mine, and we always ended up in the piano room, with raucous singing till two in the morning.  We'd go through music by Jerome Kern, the Gershwins, Cole Porter, Rodgers and Hart and Irving Berlin and throw in Broadway tunes, as well.  We'd always end up with The Road to Mandalay, my husband's (who was tone deaf - with apologies to his late mother who insisted someone told her he had great musical talent) favorite.  He was a great fan of Kipling, and by some odd chance, I happened to have this sheet music left from high school (I congratulate myself for having practiced until I could master the sections written in six flats).

The photograph of the two old lady skiers was given to me by my beloved friend and fellow adventurer, Kathi Woods.  One day, I'll figure out how to relate the subject of gardening to the story of how I became a ski bum in Taos, New Mexico.   Suffice it to say for the moment that it started when Kathi and I were living in San Francisco and went to the Cow Palace to see the great skier, Jean-Claude Killy.  We got seats on the first row in front of a rolling carpet "slope", but ended up missing the star, as he was elsewhere in the huge arena (did we actually think he would ski on a four foot high carpet?).  Kathi and I and another friend ended up spending the winter in Taos.  Alas, Kathi's adventure ended when she broke both her legs on Friday, March 13th.  By the way, that's Kathi on the left;  the shriveled one is me.

The tole lamp was given to us by Claude Sullivan, who was my husband's friend from the University of Virginia law school.  I had vowed to collect French tole lamps, but only ended up with two.  Claude was one of the "old friends".

On the far right is a photograph taken at Anne's Atlanta Debutante Ball after her freshman year in college.

Last but not least, is the painting over the chest.  This was done by Allen Ingles Palmer, who, in his early years, was an illustrator in New York.  Born in 1910 in Roanoke, Virginia, where my husband's parents settled, Allen Palmer was on his way to a one-man show in 1950 when his single engine plane crashed, and he was killed just shy of his 40th birthday.  This illustration was done in 1936, probably for a magazine.  When photographs eventually took the place of artist's drawings, Allen Palmer became a painter.  We bought another illustration (1937) and a painting that looks remarkably like an Edward Hopper.

Of course, there's much more I haven't told about the stories represented above.  The minister did go on to explain that Ellie left Carl a note, thanking him for their adventures and urging him on to new ones.  That actually begins the main plot of the movie.  I felt like I was getting a green light from this lesson.  After all, I'm still a good bit younger than Carl, and surely there are more adventures to add to the ones I've already collected on this rather small space in my living room.
Posted by Martha Smith Tate at 1:02 PM