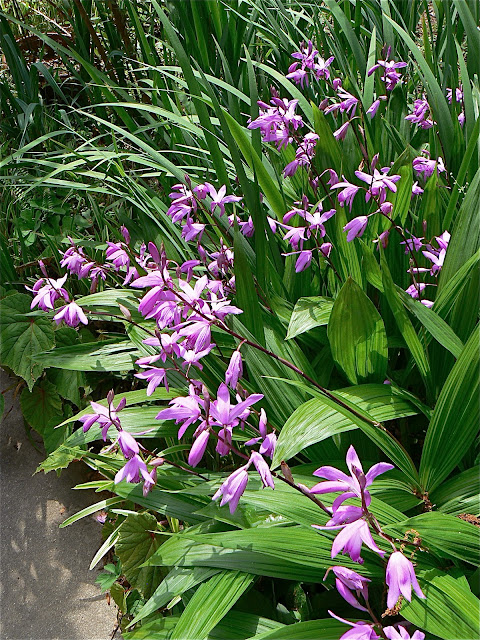 My daughter Anne is a senior publicist at Simon & Schuster in New York.  She recently worked with Susan Orlean, whose latest book is about the original Rin-Tin-Tin, but who also wrote The Orchid Thief, which had great success.  I remember it as an unsettling story set in Florida.  It gave you an idea of the lengths people go to in order to find an elusive orchid.

But those are tropical orchids, and many of them grow in trees with not so much as a grain of soil.  The ones pictured above - Bletilla striata - are terrestrial orchids.  Someone posted a picture of their bletilla on Facebook, and it created quite a stir.  Several people described their tender, tropical orchids which they'd coaxed into bloom and wondered if these were related.  Not many realized that there are hardy orchids that are great for the garden and more cold tolerant than they appear.

The hardy orchids (Bletilla striata) you see above belong to Milton Kuninansky, who has several patches of them growing in his Atlanta garden.   A few years ago, Milton gave me two plants, and now I have three.  Every spring I look forward to seeing the ribbed, papery leaves unfurling from the ground, followed by the magenta flowers on dark stems.  But this year, there's a problem.

After I read the Facebook entry, I went up to check on mine.  Orchid thieves!  The normally long leaves were short and ragged.  Yes, there were blooms struggling upward, but they looked as if they had been cropped, as well.  The deer had selected these plants and ignored everything around them.  I was dismayed, to say the least.

So, I thought I'd better check on some other orchids I discovered some years back.  These I wrote about in an older post entitled The Case of the Mysterious Orchid, on August 29, 2011.  I won't repeat the story, but I will say that for the first time, my original discovery, which is pictured in that post, now has a friend.  There are two distinct plants that will bloom this year.  In addition, I removed some ivy from around a stump and uncovered three more that have bloom stalks.  These latter orchids are quite different from Bletilla striata (which also comes in a white form).  Kevin Holcomb of Atlanta identified the mystery plants for me.  He has a collection of terrestrial orchids, and you can see his comments on the August post.  I was delighted he could make this identification for me.

What I need to do immediately is to make a big circle of Milorganite around the plants in the woods (I've already treated the bletilla), and hope it will keep the deer away.  There are six or seven does that travel together, and they pass very close to where the now not-quite-as-mysterious orchids are growing (actually, I'll forever wonder how they came to be there).

One odd occurrence.  When I wrote about Bletilla striata for the Atlanta Journal & Constitution, I received several letters from a prison.  I never knew if they were for real or not.  Why would a garden orchid could stir up so much interest among inmates?  Another orchid mystery I'll never solve.
Posted by Martha Smith Tate at 8:44 PM