No ivy in sight; it could happen 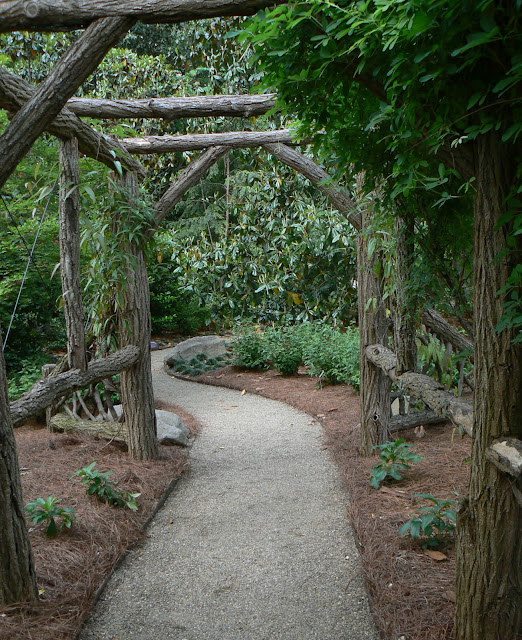 This morning, Kathryn MacDougald and I went once again to the AT&T store to figure out our cell phone bills, something we do quite often.  My blood pressure held steady, I'm glad to say, but it may have been the first time ever.  I'm crossing my fingers that the fiftieth time is the charm.

Anyway, on our drive there, we started talking about the house where Kathryn lives now.  She and her husband are renting, and, as she always does, she's out there gardening and having a ball.  I asked if she'd like to stay there permanently.  She said she didn't know if she could stand to live very long with so much English ivy around her.  The four acres that go with the house are covered in the evergreen vine.

That's the way it is here (I'm just around the corner from where she lives).  When we moved to this property a zillion years ago, English ivy was already here.  It covered the hills and valleys, went up the trees and tried its best to grow into the 1926 cottage on the back of the lot.  For a long time I didn't try to fight it until I could no longer stand it going up trees.  That's been a battle, but I'm doing pretty well.  The ivy is a cinch compared to Chinese wisteria, which makes this place look like a purple fairyland at the moment - the only time you can forgive this impossible-to-deal with thug.

One year, we went on A Gardener's Diary at Dr. Ferrol Sams's home in Fayetteville, Ga.  He took us all around his woods which he had filled with native plants - Piedmont, Florida and flame azaleas, a double-flowering Florida dogwood, lady slippers, foam flower, trilliums, Atamasco lilies, bald cypress and on and on.  The only non-native I remember was a Davidii involucrata (a.k.a. dove tree, handkerchief tree, ghost tree).   My Suburban broke down, and I was late to the shoot.  I decided to walk by myself down into the woods.  All of a sudden it smelled as if I had run into a giant cat litter box.  The odor was strong.  Then I remembered.  The dove tree.  Cat urine.  That's the scent it emits when the long white bracts are at their peak.  I looked up, and there it was - the largest I've ever seen, the papery white"handkerchiefs" hanging from the branches. A sight to see.

But, I'm off course here.  I came back from Dr. Sams's woods and decided I could no longer let the ivy dominate.  I had to make good wide paths like he had made, so I could have lots of native plants to see at close range.

I'm still covered in ivy, but I see scenes like the above photograph in an Atlanta garden and think how fun it would be to have a part of this ivy-choked woodland cleared to look like that.  Plus, I've never seen an arbor I didn't like.  This one is very appealing.

So, yet another goal for the garden.  A tamed path that winds through the woods, covered by a rustic arbor.  I'm not sure if this is locust wood they've used, but I'm guessing it is.  Right now, I'm about to go out and walk the deer trails (always looking for antlers; a buck that jumped across the driveway in front of me yesterday still had his).  But, I'll also be looking for the right place to do something like the homeowner did above.  There's something very soothing about the scene.
Posted by Martha Smith Tate at 2:01 PM