The giant who came to Atlanta 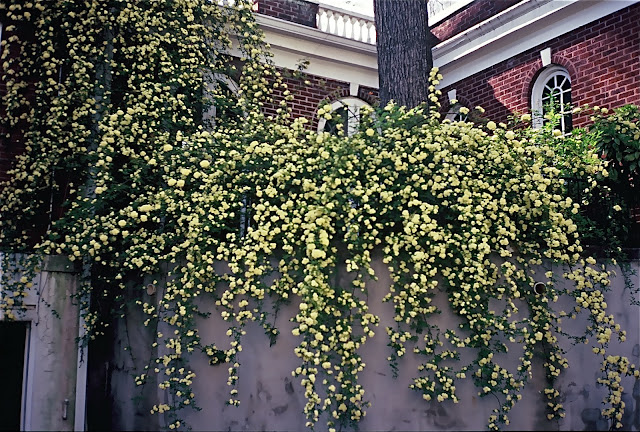 My late mother-in-law used to come to Atlanta from Virginia every year around the first of April.  Although our peak is early this year, the first week of April was reliably the height of the azalea-dogwood extravaganza. We would ride around the neighborhoods, and she would always say the same thing, "It looks like a giant has taken a paintbrush and flung it out over Atlanta."  Not a spring goes by that I don't think of her and how she delighted at seeing the splashy colors of the season.

She would really love it this year.  Everything is happening at once.  The dogwoods are out; some quince is still holding on; azaleas are blooming, giant snowballs are turning from mint green to white, Yoshino cherries are at their peak, and there are a few late daffodils holding on.  Scilla is flowering at least three weeks early; a few late camellias still have flowers as do some of the deciduous magnolias, and pansies and violas are at their most brilliant.  Let's see:  redbuds, some pear trees still white, yellow Carolina jasmine and halesias with their white bells.  And, how could I forget purple wisteria?  Saturday, in my hometown, I went past one of the biggest patches I've ever seen.  I have a love-hate (mostly hate) relationship with this thug, which I inherited from previous owners.  Still, the scent is nice in the morning, and the clusters of flowers are lovely.  I've come a long way in eradicating it since the era when it climbed every tree and formed purple castles high above.  My neighbor down the street has a later blooming white wisteria that doesn't seem as sinister.

This morning, I came down Habersham Road and almost wrecked the car at the sight of a yellow banksaie rose in front of my children's pediatrician's house.  Every year, I look forward to seeing this species rose resembling a light yellow fountain flowing to the ground from a tall pine tree.

The photograph above was taken at Kathy Rainer's house on Peachtree Battle Avenue in Atlanta.  You couldn't see this Lady Banks rose from the street - it's on the side of her house.  The first time I ever saw it, I remember walking around the corner and gasping at its size and the spectacle it made as it tumbled down from a balcony.

Tomorrow, we're supposed to have storms.  We need the rain, but I'm wishing I had taken my camera today to try and capture some of the incredible sights.  I imagine it will be even prettier in the next few days.  I don't think the giant has completely finished with his yearly job.
Posted by Martha Smith Tate at 6:43 PM