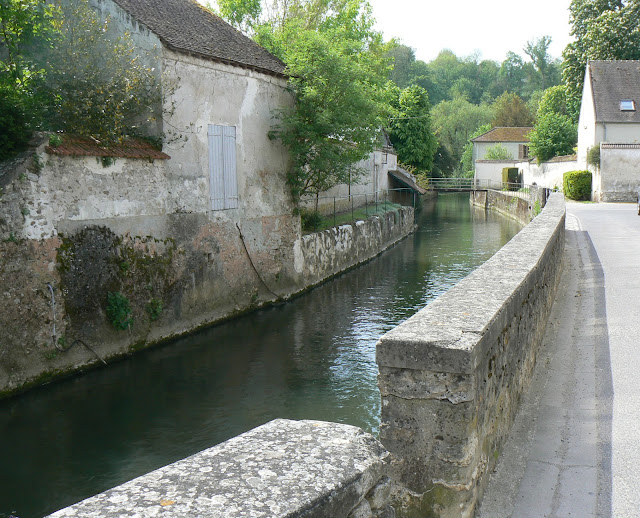 There's not much in this scene to qualify as a garden photo (maybe the hedge in front of the first building on the right;  I love how the French will have a random hedge coming up out of the sidewalk), but I keep looking at it over and over and thinking of ancient stone and vines growing up walls and roses covering an arch and espaliered apple trees behind an iron fence that's been painted a million times.

I think I mentioned that my dear friend from grammar school (we didn't call it elementary school for some reason) is renting an apartment in Paris in the Ile St. Louis at the end of June.  The apartment itself is hideously furnished, but the view is amazing.  You look right out onto the flying buttresses of Notre Dame across the bridge on the Ile de la Cite.

Here's the disappointing thing.  I have always wanted to see the roses in bloom at the Bagatelle in the Bois de Boulogne and also at the Roseraie de L'Hay in the Val-du-Marne, not far from Paris.  The Web site of the latter says to come between mid-May and mid-June for the best flowering.  I'll miss it by a week.  Maybe it's not warm in Europe this year like it is here, and the roses will hold off.  I sort of doubt it, though, as I remember being in Paris in late May, and already roses were blooming.  We shall see.

I'm really posting this particular photograph because it's been a rough week, and looking at the water and the trees beyond is very calming.  At the end of this village, the canals flow into a wide river.  On the opposite bank is an ancient orchard and a peaceful meadow where cows graze in the bright green grass.  It's a good place to think about when your head is spinning with a million different things you have to do.
Posted by Martha Smith Tate at 4:32 PM