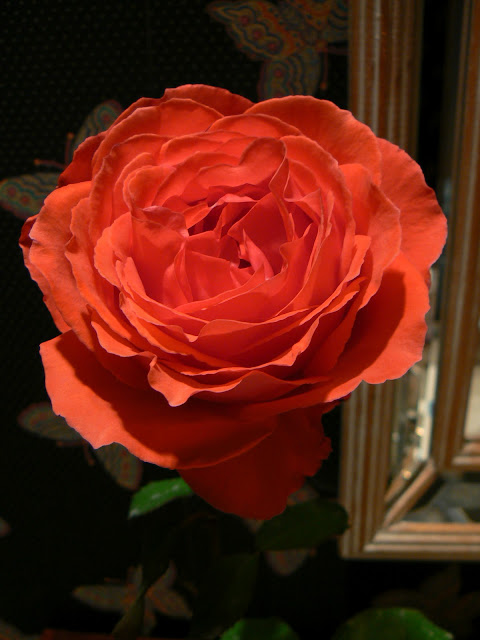 As a child, I looked forward to Valentine's Day.  It wasn't because of school - I don't remember getting special Valentine's cards from anyone - that means the big ones that boys would buy separately - in comparison to the packs of little ones that fit into the small envelopes and which everyone received.

But, I could depend on my daddy.  He always bought Mother those large, heart-shaped boxes with the satin cushiony covers and silk flowers.  My grandmother - his mother - got one, too.  February 14th was her birthday (oddly enough, she died on that date). My brother and I each got the junior size heart with the red cellophane.  Mother was always generous in sharing her larger box, so I basically got her chocolate covered caramels and mine, too.  I didn't like any of the other kinds.  Wait, the coconut ones were favorites, too.  No raspberry cremes or anything like that for me.  And, did anyone actually like those pastel almonds that were in every box?

But, thinking of Mother.  Before we moved to the farm when I was 18 and a senior in high school, we lived in town in a pre-war brick house.  I don't say ante-bellum, because that conjures up a two story house with columns.  But, our one-story house was supposedly built in 1852 of bricks that had been made in the front yard.  It was set on five acres and had all sorts of vegetable gardens, orchards, a formal-type garden (best for hide and seek) and a pasture out back.

I'm rambling here.  I meant to get to the fact that my mother loved cut flowers and grew them primarily to give away or to have flowers in our house.  She had a rose garden out by a free standing wooden garage (I looked the other day, and it is still there - hard to believe it could have survived).  I thought Mother's one red rose was Mr. Lincoln, but it couldn't have been, because we moved before Mr. Lincoln was hybridized.  All the other bushes were the pink grandiflora rose 'Queen Elizabeth', which was wildly popular in the 1950's.  There would always be armloads of these to pick.

The rose you see above was grown by Anne and Tommy McLeod of Birmingham, Alabama, (Anne, nee Wall, was my classmate at Vanderbilt; Tommy went to the University of Virginia, but visited Vandy on occasion).  When I stayed with them in late October, the exquisite rose you see above was in my room, along with two other perfect specimens from their beautiful garden.  I went crazy over their roses, which were mostly hybrid teas but in great shape.  There it was, the end of October, and the roses were thriving.

The only thing is that Anne and Tommy didn't know the name of this rose.  But, it really doesn't matter.  They have a lot of fun cutting the roses and putting the stems into interesting vases and then sharing them with others.  My mother always said she had to have a flower you could cut.  I don't think there's anything more rewarding than going out into the garden and gathering flowers to take to a friend or to an office or to a teacher.

So, on this Valentine's Day, I'm thinking of my parents and boxes of candy and Queen Elizabeth roses - all good memories.  I'm thinking, too, of the future and of all the flowers I'm going to plant and enjoy cutting and how much it fun it will be to gather up big bouquets to share.  I think this whole trend is making a comeback, and well it should.
Posted by Martha Smith Tate at 1:03 PM