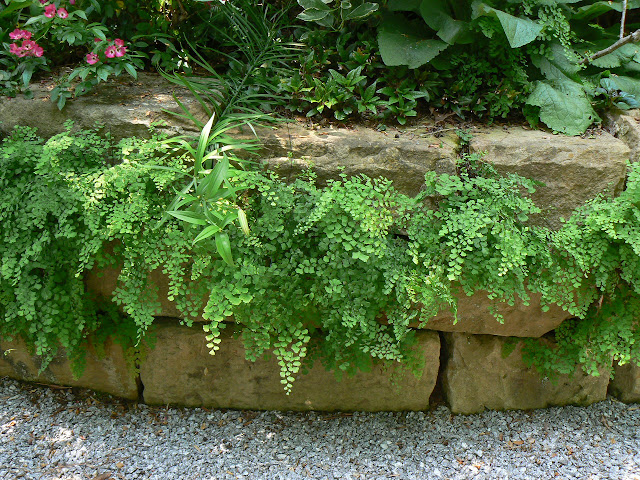 Kathryn MacDougald, my witty and brilliant fellow creator and executive producer of A Gardener's Diary on HGTV (now on Hulu.com), had a birthday party a few years back.  She specified that any gift should be in the form of a rock.  She is rock crazy, to say the least.

One time, she and I were driving back from somewhere in Tennessee (I was thinking it was Knoxville, where HGTV is headquartered, but it was another town where we attended a tomato festival).  We could hardly go a mile without stopping to inspect rocks on the side of the road.  I think it was okay that we filled the trunk of the car with stones that had fallen from a mountainside.  Perhaps by doing so, we saved a life.  At least, that was our story.

Back to the birthday party.  There were many clever gifts (why can't I remember even one at this moment?).  I contributed fake stone - a planter made from hypertufa - which consists of cement and peat moss.  I made a trough like I gave her when I took a course at the Atlanta Botanical Garden.  My ambition was to have hypertufa troughs as planters all over my garden.  I never did but the one.  I bought the one I gave Kathryn.

But I've gotten off track here.  The photograph above shows real rocks and what you can do to add some charm to a stone wall.  In this case, the gardener, Jim Scott from Alabama, another extreme rock and stone nut, tucked in northern maidenhair fern into the crevices between the stones.  If you shove some good dark soil into the cracks, then you can put in any trailing plant.  I've even seen a foxglove growing out of such a wall.  An errant seed must have landed in the right (or would that be wrong?) place.

At any rate, here's a good idea if you have a wall in shade.  For sun, you could plug in thyme or oregano, other herbs or sedums.  When I glanced at this photograph, I thought this was a wall to be used for seating.  I said to myself, "Wouldn't the fern tickle your legs if you had on shorts?"  Then I looked more closely and saw this is more of a retaining wall, not at the correct height for sitting.  Either way, you can make a rock wall look even better with a good choice of plant material.  Be sure to water well in the beginning or if you see signs that the plants are thirsty later on.
Posted by Martha Smith Tate at 6:51 PM