Snow shows a need for a clean-up 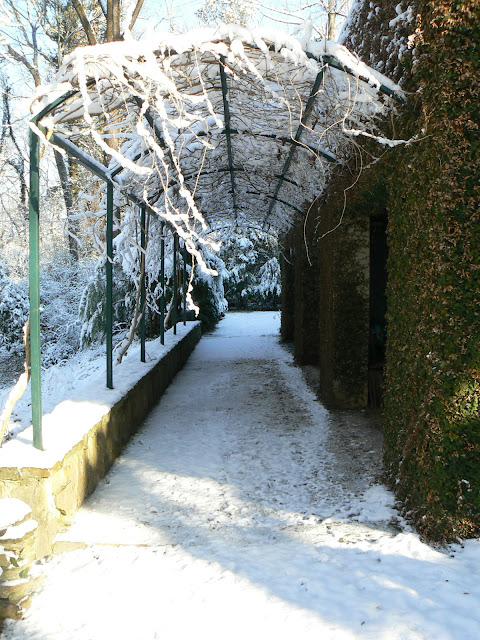 February 12, 2010.  Two years ago yesterday.  A good snow (the kind that doesn't freeze over and stay around on the roads for days) fell, and I took a ton of pictures.  How I wish I had tidied up the trumpet vine on what I call my tunnel.  The yellow/apricot blooms were probably hanging down from those straggly vines in front, and I either didn't have the heart to cut the blooms off in late summer or was too lazy to prune them or just didn't notice and had let them go.  It's a shame, because this photograph would have showed how nice the tunnel could look.  Plus, the dog tracks don't help.  Oh well.

I also see on the right hand side that the fig vine had gotten zapped, and the brown foliage should have been swept off.  It could have used some shearing also.  Fig vine is iffy here.  It was a chance I was willing to take to grow it and let it take over.  We had a good run for several years, and then in 2010, it all froze. It's just now making a comeback.  I'll show a picture one of these days of how it looked at its best (it had crept up onto the inside walls of the terrace on the upper right).  I hope I can get it to look that good again, but I may be quite old when that happens.

But, back to this structure.  This was built in the late 1980's.  I copied it from a restaurant in the Perigord.  I had a newspaper clipping that showed a stone sitting-height wall with iron arches coming up and attaching on the opposite side to a wall.  I drew it all out for the iron man, and when he arrived, I nearly had a heart attack.  The horizontal pieces looked too big, and the pieces on top looked too small.  But, when he got them installed (the wall had just been built; that was another story; I made the mason turn all the stones around and then put the grout in real sloppily.  He thought I was crazy), everything turned out as I had envisioned.

I seem to remember the iron work was done in spring.  The great English gardener Christopher Lloyd came to Atlanta to give a lecture, and we had a dinner for him here.  The iron pieces had just been installed and were still a maroon color (now they're painted dark green).  Christopher Lloyd went over to the wall and looked down, saying he thought the pergola would look good in several years.  I was crestfallen, but at least he thought it would work out some day.

Now, I look back at my bravado in having such a famous English gardener to dinner.  There were maybe 40 of us.  I had it catered by my husband's client's daughter.  She was so excited at the prospect of serving a gardening celebrity.   She arrived just before everyone came and unveiled her surprise.  She had made rack of lamb and cut them into beautiful chops.  But, attached to each bone was a dyed carnation.  She was so proud of what she'd done.  I couldn't hurt her feelings by removing them.   Besides, she wanted to stay and watch his reaction.  It's the only time I've ever seen lime green, light blue, purple, etc., carnations attached to lamb chops.

In the summer, I'll have to tidy up this area and try for some more pictures.  I just recently put in another yellow trumpet vine (Campsis radicans 'Flava') at the far end, where I've been needing one for years.  I saw it on a half-price table at the end of autumn, so I was thrilled to have it.  The canopy is pretty much finished, but this will help cover the very end.  I can't wait until June when it blooms, and the hummingbirds come.  But before that, I'll be looking for the rat snakes as I walk under it this spring.  They like to hang out up in the foliage.  I'll have to show you a picture of one very soon.
Posted by Martha Smith Tate at 3:28 PM