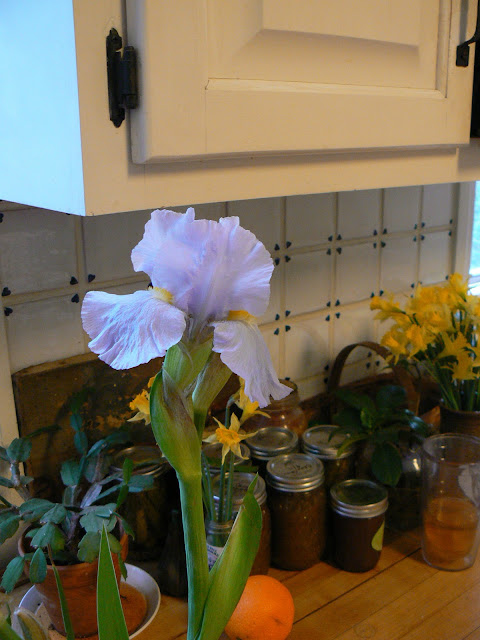 I may have mentioned that on December 19, 2011, around nine o'clock in the morning, I walked over to my kitchen sink and looked out the window.  I froze. Standing there on the edge of the driveway was an eight point buck.  He was looking down at what I first thought was a big orange cat.  But, it was a red fox, right there beside him.  I was transfixed for a moment, unable to move.  Then I ran to the other room to get my camera.  Just as the fox turned around and started to move away, I caught them in a blur.  I wish I'd been faster.  Moments later, I was able to get a clear shot of each animal.  Still, that fuzzy picture recorded something I don't think I'll be seeing again.

Ditto the images in the above photograph, taken on January 15, 2012.  I went to the farm, and there by the front steps was this stalk of iris with multiple blooms.  I brought it home and watched each day as one flower faded and another opened up.

In the meantime, I picked bouquet after bouquet of daffodils.  You can see in the background that some had already faded.  The first flowers started blooming at the end of December.  Last year I took a picture of a bunch I'd picked on February 28.  In 2010, the daffodils were at their peak on March 10, according to another photograph.  The above iris was in bloom on April 14, 2011.  Plenty of bearded iris are re-bloomers, but they usually flower again in the fall, not in January.

We've had wacky warm spells before like this, though it's been a while.  I can remember one year when the peach growers didn't have enough cold to form crops. That was years ago.

We're all wondering what the rest of spring will be like.  I looked back to see about snowfall.  On March 1, 2009, it snowed, this after a hailstorm in February that pummeled the house at the farm causing a lot of damage.  In 2010, it snowed on January 8, February 2 and March 2.  Last year, on January 9, we had the big snow that then got rained on, making it impossible not only to drive, but to walk anywhere, as the sheet of ice that formed was so thick and slick.

So, it will be interesting to see what the spring will be like.  The prediction is for warmer than normal temperatures in February.  On Monday, I'll post a photograph I took last Saturday, January 28, of a very unusual and beautiful shrub/tree in full bloom.  In 2010, I photographed the same plant in full bloom on March 28, a pretty big difference.
Posted by Martha Smith Tate at 10:10 AM