A reminder of simplicity 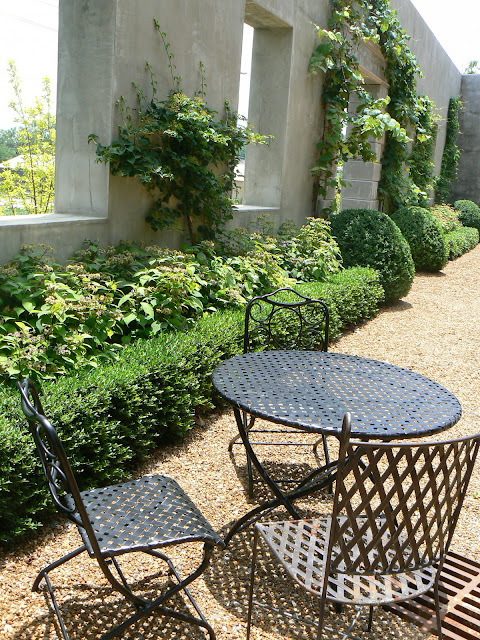 One day, I might delve into the story of how I came to possess 4,000 Belgian block cobblestones (the big, heavy, loaf of bread sized ones).  Just briefly, I obtained them when we were building our house in the early 1980's to make a front motor court.  Getting them here was the worst (God rest Daddy's and Chip's souls), but then I let someone who didn't know anything about drainage or using a level, put them in.  The young man needed the money for his baby's heart operation.

Stop the story right there.  For two disastrous decades, I had a lake in front of my house when it rained.  The cobblestones would be caked with mud.  They've now been dug up and are at the farm, awaiting their next incarnation.  In front of my house, I have pea gravel, and it's my favorite thing ever. Miraculously, the pebbles weren't too deep  (a few people get stuck, but only for a moment).  I love the look of just the two boxwoods in front, and the simple pea gravel against the limestone and stucco of the facade.

But, pictured above is a garden I really like.  I'm not sure if it still exists, but it was just the most pleasing entrance to a commercial building in a warehouse district.  Simple lines.  Simple plantings and very reminiscent of European gardens you'd stumble on sometimes.

What brought all this to mind was Tara Dillard's popular blog, showing how she was making a cobblestone border for a client and filling the middle of a courtyard (or was it a parking area?) with gravel.  Last year, I dug some errant cobblestones from around the house and lined them up in what used to be a rectangular lawn.  I made two squares and a long rectangle in the middle.  But, then I proceeded to fill the outlined spaces with tomato plants and zinnia seeds.  By July, it was a wreck.

This year, I'm rethinking the spaces.  Where the lawn used to be (it's been covered with black landscape cloth for several years), I'll have to use sand instead of gravel to save money.  I'm going for the look of a Parisian park.  I've just got to be disciplined about what goes inside my cobblestone outlines.  I can still do the obelisks in the middle, but I need simple green outlines instead of tumbling, riotous color.  The whole thing is seen from above, so I can't go wild again with plants that flop everywhere.

It's going to be hard, but I'm going to take a cue from the above garden and try my best to keep everything uncomplicated.  The space above makes me want to sit down and linger a while.  There's something soothing about the organized lines that give way to the vines going up the walls.  A very nice place, indeed.
Posted by Martha Smith Tate at 2:39 PM