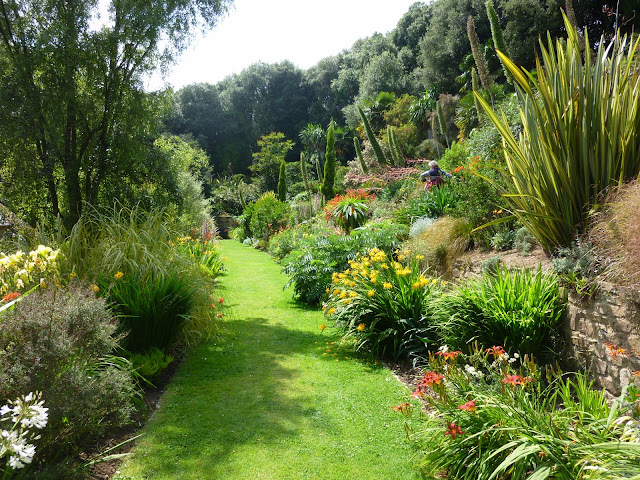 It's cold here in Georgia again this morning (for you in the northern states, it would probably seem balmy).  The thermometer on my back stoop is usually pretty accurate - 22 degrees yesterday morning;  23 today.  When my dog and I went up to the street to fetch the paper, the gravel driveway was frozen solid.

To warm things up, I chose a photograph taken last July by my friend Carol Tessier, who is a keen (a word she would use) gardener in Asnieres, just outside the city limits of Paris.

This is one of the borders at the stunning Kerdalo Gardens in Brittany.  Started in the mid-1960's by Prince Peter Wolkonsky, a Russian aristocrat who moved to France with his family in 1914, the garden has been managed since his death in 1997 by his daughter, Isabelle Vaughan.

Prince Wolkonsky built his gardens around a derelict stone farmhouse which he restored and added onto (from its looks today, I'd call it a manor house).   The thirty-odd acres are planted with collections of many rare and unusual shrubs, trees and perennials from around the world.

The steeply sloping land was terraced to create lawns with thickly planted borders.  Water from a spring in the forest was channeled to create a formal canal, which then flows downhill, forming waterfalls, quiet pools and a misty grotto.  My business partner Kathryn MacDougald will be interested to know that the latter area is planted with exotic gunnera, which she has tried over and over to grow here in Georgia.

As he was creating his gardens, the prince would bring new introductions by the boatload from English nurseries.  Even a partial listing of the plant material at Kerdalo would range into the thousands.  His collections were not planted at random, but artistically woven into the hillside and leveled-out areas.  For example, a line of glossy green camellias with red flowers forms an avenue that borders a grove of some fifty varieties of magnolia.  The range of design extends from more formal areas near the house to an area that resembles a tropical jungle further downhill.

I've never been to Brittany, but I think of it as a cold, windy place that juts out into the wildest part of the Atlantic Ocean.  However, as you can tell by the photograph, the climate is fairly mild, allowing for a wide range of plant material.

Carol sent me several photographs of Kerdalo Gardens, so I'll be posting some more as we go along.  Meanwhile, I've got to figure out a way to visit this magnificent garden.  It had gone into decline in the prince's later years, but it looks in great shape now.  It's heartening to learn that this very complicated series of gardens has been saved and is open for the public to enjoy.  I think there are other gardens nearby that merit a visit, as well.  I hope I can get there soon.
Posted by Martha Smith Tate at 9:44 AM