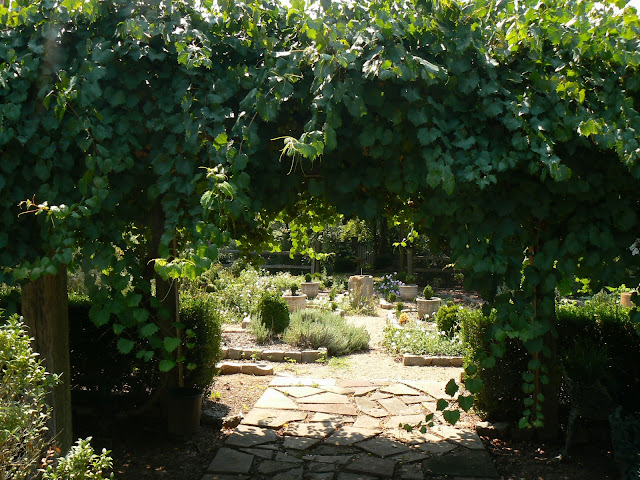 I think I've mentioned before that my great grandparents lived along the Chattahoochee River in what I call a Southern salt box - a house with two stories on the front that sloped down in the back.  I wish I'd written down when the house was built - it was well before the Civil War.  Mother used to show us  holes in the wall where the Yankees had fired their guns.  There was also a secret closet behind the stairs where the valuables were hidden during the war.  On the top floor was an enormous spinning wheel, which disappeared along with other items when my Great Aunt Abby got dementia.

Anyway, the thing I loved most about this house was the yard with the giant gardenia bush and all the flowers that sprang up every year.  But, best of all was the scuppernong arbor.  I say scuppernong, because the fruit was golden instead of purple.  The purple ones we called muscadines.  I think that officially they're all one or the other, but I can't remember which.

At our family reunion in late August, the children would spend the entire time under the arbor, reaching up for the sweet grapes.  You had to hold them between your fingers and squirt the insides into your mouth, as the hulls were too tough to eat.

While I loved the delicious fruit (now when I walk into Publix in late summer when the scuppernongs are for sale, the fragrance takes me right back to that rickety arbor), I think it was just the shade of the vines overhead and the idea that you could find a little respite from the August sun that I liked best.  It was a good place to be, playing with your favorite cousins, after you'd stuffed yourself with Mr. Bill Melear's barbeque and Brunswick stew, along with white bread, potato chips and the sweet, but pungent pickles.

But back to the photo above.  I took this in a wonderful garden near my hometown.  The owner, Liz Tedder, has all kinds of gardens around an old plantation house which she restored.  This particular scene is of the muscadine (or scuppenong?) arbor, looking through to the herb garden.

Which leads me to the thought.  This is the time of year one should be planting these Southern grapes (they don't hang in clusters like Concord grapes).  Maybe this year, I can find a place at the farm for such an arbor.  I love how this one frames a view.  That would be ideal, but I'd be content with a simple one like my great grandparents had.  At least I would have a little taste of the past.  Sadly, Melear's (the one we frequented in Union City, Ga.) is long gone as is what I considered the one true barbeque.  I can't get that back, but I could grow scuppernongs, which would help recapture that feeling you had of being in the fold of your family in a place that seemed pretty enchanting on a hot August day.
Posted by Martha Smith Tate at 4:39 PM