I knew Pearl when 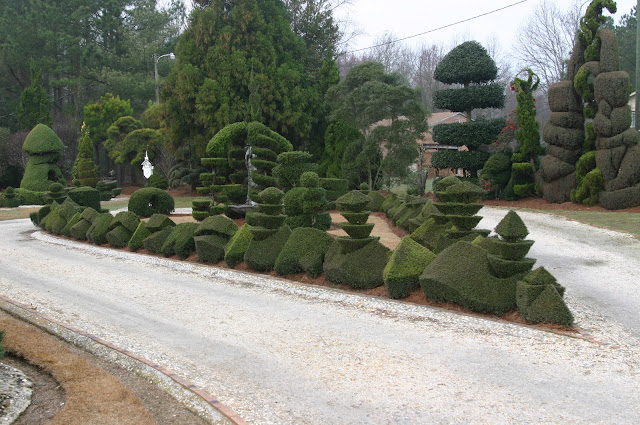 I remember the exact year I met Pearl Fryar.  January 1990.  The reason I can recall the month and the year is because when I first saw Pearl's topiary garden in Bishopville, S.C., I could see the destruction from Hurricane Hugo in the distance.  The massive storm had laid waste to places like Charleston and Pawleys Island, S.C., in September 1989.  Pawleys is the beach where my family (my husband, children, his mother and sister and her family) had vacationed since 1976.  The Tip Top Inn where we had stayed was washed away.  The island recovered, and my girls and I still go there.  The only year we missed was 1990.

At any rate, here it was January, and I was looking for something suitable for winter to write about.  I called up another writer Tom Woodham to see if he knew anyone who did topiary.  How fortuitous.  Tom, who then lived in Atlanta, had just been home to Bishopville, S.C., where he had made an incredible discovery.  A man named Pearl Fryar had a yard full of topiary he'd trained and clipped himself.  "You're not going to believe your eyes."

And I didn't.  I drove four hours (with the blessing of the AJC editor) and turned down Pearl's street.
What I saw were these objects everywhere, like green pieces of art.  Pearl had carved almost every shrub you could think of into all sorts of shapes - some classical that you would see in an English garden; some abstract that reminded you of giant ballerinas; animals (he had a tiger for Clemson and a gamecock for the University of South Carolina); letters that stood about four feet high, spelling out L-O-V-E; tall complicated sculptures that revealed limbs in a wish-bone pattern; plus spirals, hearts, balls and diamonds with balls sitting atop.  I can't even begin to list the shapes, nor can I write down the variety of plant material he had used.  Besides the obvious Japanese and yaupon holly (he had his address spelled out parterre fashion with dwarf yaupon), he had every evergreen you can think of.  Even deciduous trees like dogwoods had been coaxed into various shapes.  I remember one dogwood that had limbs forming a swing.  It was mind-boggling.

My feature article came out in the Atlanta paper in February 1990.  Pearl always claimed that was what set off his career, which is laughable.  He was already being pursued by newspapers, national magazines and television.  Before we knew it, Rosemary Verey, the famous English garden writer and author of many books, was paying a visit.  Busloads of tourists began arriving,  many of them from other countries.  Pearl had to hire an agent to book lectures and demonstrations all over the U.S.  To this day, he is pursued by the media and has caught the attention of the New York Times, Martha Stewart, CBS Sunday Morning and on and on.  Someone made a documentary about him.  He even has his own Web site, PearlFryar.com.

All this publicity is well-deserved.  Pearl has a talent that I don't think we'll see again.  He can look at a plant and envision what it could become.  On my first visit, he sent me home with an upright juniper and some string dyed with shoe polish.  I was supposed to wrap the string around the plant, then cut into it to make a spiral.  I only completed the first part and then had to remove the string.  I couldn't make myself do the necessary cut.

I believe Pearl could fashion a topiary in his sleep.  He uses gas hedge trimmers and cuts so fast that you can hardly follow what is happening.  Most of the specimens in his three acre yard have taken time and much trimming to fulfill his vision.  But, he can also make a spiral in seconds or do a cloud form, Japanese style topiary in five minutes' time.

Erica Glasener took the photograph above when A Gardener's Diary did our second episode on Pearl.  I had been mystified when I first saw what he'd done in 1990, but by 2005, I was incredulous.  There Pearl was, walking about on a giant mushroom made of live oak, trimming yet another piece on top.

I have to stop here, because there's so much to Pearl's story that I'm omitting.  Suffice it to say I'll be writing about Pearl again.  Once, I was supposed to be his Vanna White type assistant in a demonstration.  It turned out to be a disaster, due to my faint heartedness.  Pearl was kind, though, and smoothed things over.  More on what happened later.
Posted by Martha Smith Tate at 1:16 PM