A green thumb and a gold heart 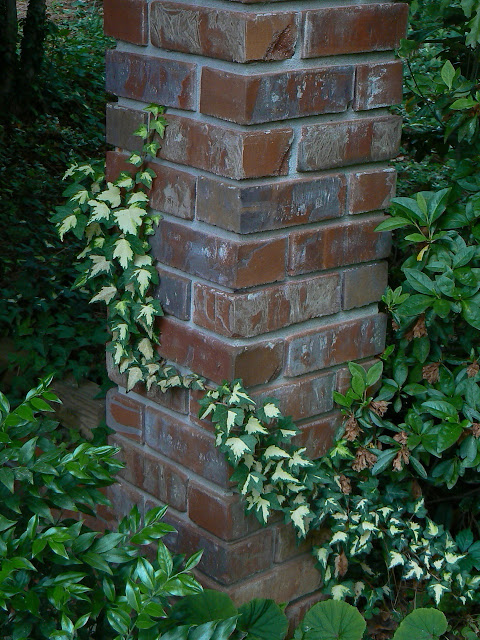 How ironic.  I planted the type of ivy you see above (Hedera helix 'Gold Heart') some 15 years ago.  It's like it's frozen in time.  It does nothing.  There's one little loop of it standing about 12 inches high.  Another piece goes up the wall about three feet (what happened to the saying, "the first year it sleeps, the second it creeps, the third it leaps"? How is it that I'm stuck in"it sleeps"?).  I envisioned a patch of this lovely English ivy on the north side of my house, where I wouldn't mind a bit of color and could control its growth.  I could use it at Christmas or just enjoy the pretty variegation to light up a shady area.

About the same time, Margaret Moseley planted 'Gold Heart', at my recommendation.  I assured her that this selection was not very aggressive.  All was well for a while, as in the photograph above showing a pillar of Margaret's carport.  Now, she's very unhappy with me.  The ivy has spread everywhere in her garden - on trees and on the ground.  She has to rip it out, and it's a constant battle, just like the one I'm forever waging with the common, all-green English ivy.

I've read that there's no such thing as a "green thumb", but I don't know.  Margaret has an instinct about getting plants to grow.  One thing that probably determines her success as a gardener is if something isn't doing well where she's planted it, she moves it without hesitation.  She doesn't wait 15 years.

So, a New Year's resolution:  Move my stunted plant to the base of a newly cut tree stump and see what happens.  I have a feeling that if I live to be 95 like Margaret, that stump will not be covered.


But, we'll see where I am ivy-wise at the end of this year.  The area around the stump should have the exact right type of soil for 'Gold Heart' - rich, woodsy dirt that is both moist and well-drained.  Maybe since it's been sleeping so long, we can just skip that part and go directly to "it creeps."  I hope I can give you a good report well before the dawning of 2013.
Posted by Martha Smith Tate at 7:40 AM