Can spring be far behind? 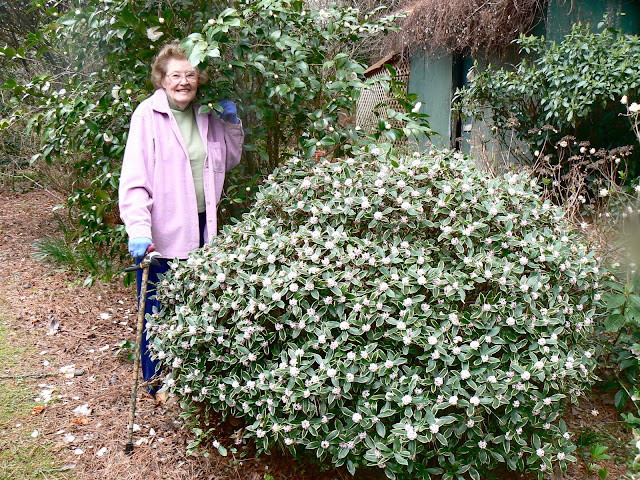 It is a gray, rainy day here in Georgia, a day my late mother would have called "disagreeable".  There was no wind to speak of, but it wasn't exactly warm, either.   The forecast is for gray, gloomy days, but with fairly mild temperatures.  Tomorrow, it's supposed to rain hard all day.  There may be a peak of sun on Tuesday before more clouds move in.

I am not complaining, as I watch another front coming into the Pacific Northwest, and see all the frigid temperatures in the upper plains states.  But I did look for a photograph to bring a little cheer and the promise of spring.  I love this picture of Margaret Moseley by her (giant) Daphne odora, taken last year a couple of months before her 95th birthday.  She has several of the intoxicatingly fragrant plants and says some are already open.  Despite the weather, she walked to the back of the garden today to find there was more in bloom that she had realized.

"There's not a thing out there," she told me this morning.   I laugh, because it was only last week that she told me it was the prettiest it's ever been.  But she called this afternoon and left a message that it's not all as bad as she had thought.  Still, she believes it will be early February before the camellias make a big comeback.

But that's how it is with a winter garden.  You hit a mild couple of days, and you think spring's around the corner.  A cold snap comes, zaps all the open flowers and everything retreats for a while.  We are lucky here in the Southeast that we can have winter gardens, although it can be very disappointing to have a yard full of flowers one day, and ruined brown blossoms the next.

So, for the next few days, I'm going to hang indoors and dream about retaining walls and deer fences and all the wonderful flowers I'm going to have in the near future.  I'll be thinking, too, of the last lines of Shelley's Ode to the West Wind:  "If Winter comes, can Spring be far behind?" That always gives me hope on a gloomy January day.
Posted by Martha Smith Tate at 3:33 PM