The beauty and the risk 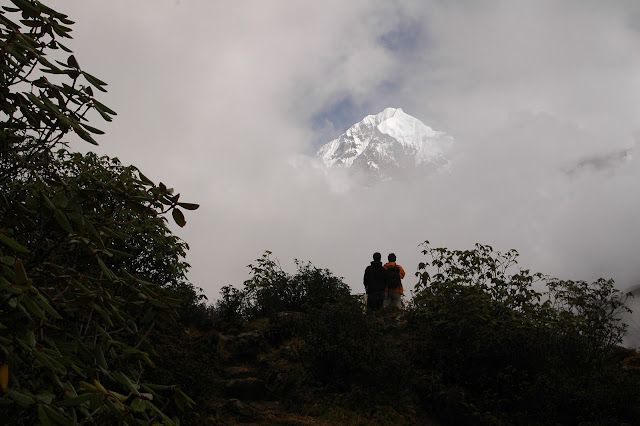 On Saturday, I attended a lecture given by Scott McMahan, one of America's top plant explorers.  The subject of his talk was a recent trip to Asia to collect seed.  I was mesmerized.  His presentation took you to a part of the world most of us will never see - a little explored region (I'm not giving the country, just in case) where the tea olive (Osmanthus fragrans) grows into giant trees (the explorers at first thought they'd discovered a kind of evergreen oak), and the people consume only what they grow and barter with neighbors for their needs.  The outside world is all but cut off.

Scott, who owns a nursery in Clermont, Ga., and co-owns GardenHood on Boulevard in Atlanta, travels with Dan Hinkley (founder and former owner of Heronswood nursery in the state of Washington), who has made dozens of expeditions all over the world, and Ozzie Johnson, local plantsman and business owner, also a seasoned explorer.  The three have been on many trips together, looking for plants with ornamental value to share with the world.  Their tales of near death misses will make your hair stand on end.

On Saturday, Scott had us laughing at some of the stories of this recent trip and gasping in horror at others.

He showed us a photograph of a hotel set in a desolate mountain valley with looming peaks right in back.  Atop the four story structure was a giant, and I mean monumental, golden Buddha, as large and wide as the hotel underneath.  Although they appeared to be the only guests, the three guys thought they were about to spend the night in the lap of luxury as they entered a lobby with a marble floor.  The rooms were a different story.  Small and cramped, they were at least carpeted.  But, there was a catch.  Apparently water running off the mountains ran right into the hotel, so when you stepped on the carpet, there was a loud squish and visible water.  Scott says it made for a very uncomfortable night, just thinking about getting out of bed.  In addition, they found out the impressive Buddha was actually made of fiberglass.  Nothing in this remote area is at it seems, apparently.

Another photo showed a Buddhist monastery perched at the top of an impossibly narrow, mountain peak, soaring, needle-like, thousands of feet into the air.  Ozzie elected not to go, but Dan and Scott decided to make the climb, a choice they were soon to regret.

As they were half-way up, they were faced with a sheer limestone edifice.  The only way up was to climb a heavy chain.  This seemed doable at first, but then it became difficult to hold on.  The catch was, there was no going back down.  Finally, at the top, the enjoyment of the view was quickly tempered by the realization that the way down was possibly worse than the frightening ascent.  The two started down narrow, precipitous steps that followed the mountain's edge.  At first there was a pipe that served as a sort of guardrail.  Then, there was none.  Absolutely nothing but air was between the explorers and a sheer, thousand foot drop.  There was no room to turn around and no other way down.

Knowing that Dan Hinkley is petrified of heights, I was thrilled to learn that he is alive.  It is Dan who gave me permission to use the photograph above, taken in Nepal at a rare moment when the clouds parted to show Mt. Everest.  In the foreground, you will recognize the foliage of rhododendrons.  Many of the fabulous mature specimens you see in England on the northern coast of France (and some in this country) came from the Himalayas.  Explorers traveled to these parts of the world centuries ago and risked their lives to bring back beauty to share with gardeners and nurseries back home.

Dan, Ozzie and Scott are doing the same thing, though very responsibly, but they encounter many of the dangerous conditions that faced their forebears.  Their finds will go to botanical gardens and hybridizers in the U.S. and several other countries and some possibly to medical research facilities.  The plants you have in your yard likely came through these same channels, by way of adventurers, some of whom met their deaths on such expeditions.
Posted by Martha Smith Tate at 10:20 AM