The fun of gathering greenery 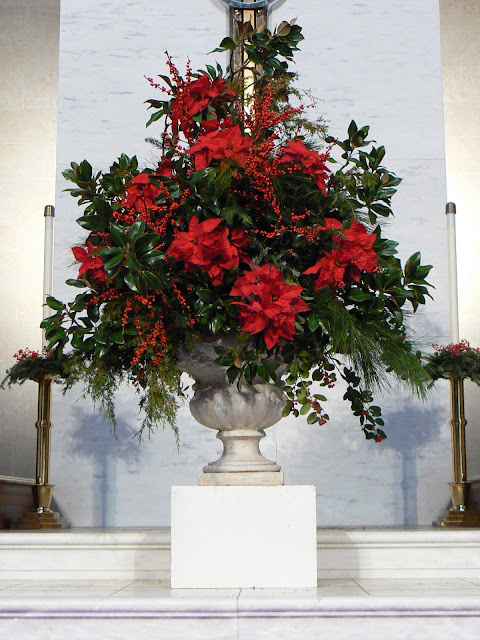 I am no flower arranger.  I can tell you if the arrangement is the right size and proportion, but ask me to start from scratch and end with something decent - I don't have a clue.

But, I am a good gatherer.  To save money, we supplement the flowers at the church (our Flower Guild has to create enormous arrangements to have any impact, since our church is so huge; we call it the "Methodist Cathedral") with greenery from nature.  For my team,  I am the head gatherer, although Peggy Witt forages for good stuff, too.  We both contributed to last Sunday's arrangement, shown above.

Benjie Jones is the chief arranger.  He starts with the foliage, and usually he is inspired by the shape of the greenery.  This time it was the magnolia.  Peggy discovered a vacant lot surrounded by a chain link fence.  Inside were three magnolias with what we like best - small leaves with a pretty back like rusty brown or khaki suede. The magnolias had a wide habit, allowing us to stop Peggy's SUV and crawl up to cut branches.  I know this is stealing, but the part we cut was hanging over the public road.  That was our excuse.  And, after we finished lopping off a few branches, you couldn't tell we'd been there.  Also, we don't do this often.  Well, maybe I do climb up on the right-of-way of the interstate to gather bittersweet.  That requires a getaway driver, though, and I don't like to endanger people's lives. We are always very careful.

Back to the above greenery.  The pine you see on the right side came from my parents' farm.  They bought the land in 1957 and left it to my brother and me.  I go down there every weekend.  My latest forages have produced winged sweet gum branches (will show you those in next week's arrangement), cedar with light blue berries (not used here), and cedar with orange/yellow tips (why this occurs on some  trees, I don't know; I saw some at a very talented florist's shop and admired it;  lo and behold, we had it on the farm - I'd never noticed).  You can see it hanging down on the left side of the arrangement.  Benjie says it adds good texture.

I don't see it, but there's some Fraser fir in there, too.  I picked this up at the Home Depot where they were selling Christmas trees.  I got my tree there and picked up leftover cut branches from the bin.

The evergreen holly hanging down on the right came from my house.  Some of it is dwarf Burfordi holly, but most is the regular Burfordi.  The shrubs at the farm are in full sun and are loaded with berries.  But they've been sheared over and over, so the branches are short.  The ones you see came from my house from an area where there's not a lot of sun.  The branching is sparse, but there are still lots of berries.  Benjie was able to get a "hang down" effect with the longer pieces.

The deciduous hollies (those without leaves) we bought from a floral wholesaler.  The poinsettias were left over from the now dismantled poinsettia tree that we were so proud of.  We took the root ball from the plastic pots and wrapped them in plastic grocery bags (the produce kind) and wired them to sticks.

Oh, and those candle rings at the back.  I made small wreathes for my house from Home Depot Fraser fir, but decided to bring them to see if they'd work on the brass candle holders.  They're on straw forms wrapped in green plastic.  Peggy Witt brought the nandina berries (she has tons at her house), and Wendie Britt had the idea to embellish the fir with the red berries.

So, for the price of the holly and poinsettias (altogether around $100, I'd say), we had a 10 foot tall arrangement (counting the box) that made a great impact.  Our church seats several thousand, and it was packed on Sunday.

What you don't see is the variegated osmanthus Peggy found at a house of a friend.  She cut some branches and used them in the candles rings around the altar table and on the processional crosses.  She gave Benjie and me some; he used his on his front door wreath (spectacular with all the aforementioned greenery); mine is in a mixed green arrangement in my dining room.  Since it's hard to get English variegated holly to grow here, this variegated osmanthus is a great substitute.  I'm going to plant some, for sure.

It makes you feel so good just to tromp around the fields and woods, and second, to see it all come together in such a beautiful way.  I still have some ivy to tap and some more evergreen holly to pick.  Every year, I look forward to gathering greenery.  It's one of my favorite parts of Christmas, and it's a good way to get out in nature and save some money, too.
Posted by Martha Smith Tate at 7:48 AM No comments: Links to this post