Christmas in the back dining room 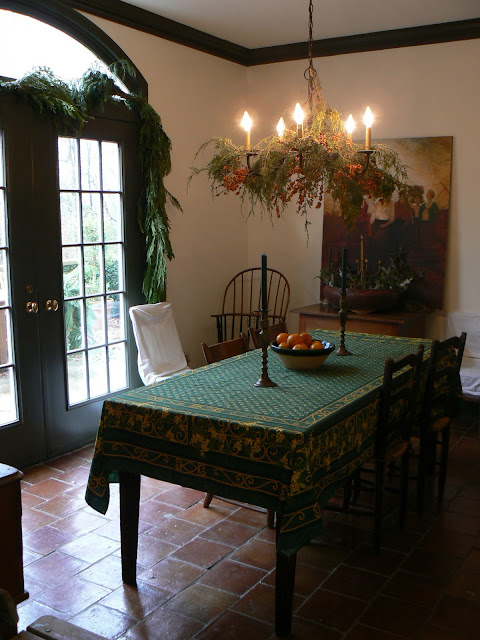 The chandelier is messy, and the photograph is dark.  But, I still want to do another "deconstruction" from a couple of Christmases ago.

I seldom use this room anymore.   It was intended to be a breakfast room, but for years we ate dinner here, so we started calling it the "family dining room."  At Christmastime, my late husband and I gave a dinner party, which we called "Old Friends".  There were usually 14 of us, and some of us ate in the front dining room and some of us back here.  Every year, we rotated, but everyone would joke about being in Siberia when it was his or her turn in this room.

For years, there was no chandelier above the table, only a light bulb.  Ditto the front dining room.  The reason?  I couldn't find any chandeliers I liked (these days, I'm always seeing ones in catalogs that would do nicely - where were they when I needed them?).  Eventually, when it looked like I would have to sell my house, a real estate agent said I had to put something up.  I went to Home Depot and bought two $69 fixtures that were gray with gold highlights.  Hideous, but the shape was good.  I bought some bronze spray paint and had them installed.

So, this was the Christmas when I got some free 'Winter Gold' holly berries from Wilkerson Mill Gardens.  The branches were cast-offs since some of the fruit had shriveled.  I culled the bad ones, and stuck them on the chandelier.  Then, I hastily threw up some cedar I'd picked at the farm.  I also wrapped ivy around the chain, but by the time I got around to this photograph, it was crispy, and I took it down.  I bought the arborvitae garland around the French doors from the youth at my church who sell greenery every year to raise money for mission trips.

The big painting you see in the background came from Scott's Antique Market.  It wasn't old, but something about it appealed to me.  Under it is a big glazed pottery bowl sitting on an antique pine table that my mother-in-law found in Virginia in the 1940's.  The American windsor chair was left by the former residents of the cottage we bought in 1973.  We found it in the basement.  Someone had stripped the paint off the top, but the seat and legs still have old green paint.  One of the handles is broken off, but it sure looks antique and authentic.

The tablecloth on the French farm table (which I hardly ever cover up, because the dark cherry wood is so beautiful) came from Provence.  I have a weakness for Provencal prints, and on trips to the south of France, I'd come back loaded with seat cushions, yards of toile, napkins, duvet covers and whatever else I could cram in my suitcases.

Since the berries were more orange than gold, I put some oranges in a bowl, also purchased in France.  The two French chairs you see came from an antique store in Pawleys Island, S.C.  I threw a white slipcover on a red French cafe chair, since it matched nothing else.

What you can't see in this picture is another cafe chair that you can tell was once painted green, an antique pine corner cupboard from Virginia and a limestone fireplace.

I do love this room, and even though it's not used anymore, I can admire it as I walk through to the back hall.  As time goes on, circumstances change, but it's nice to have things around that remind you of family and friends and of Christmases past.
Posted by Martha Smith Tate at 8:49 AM 1 comment: