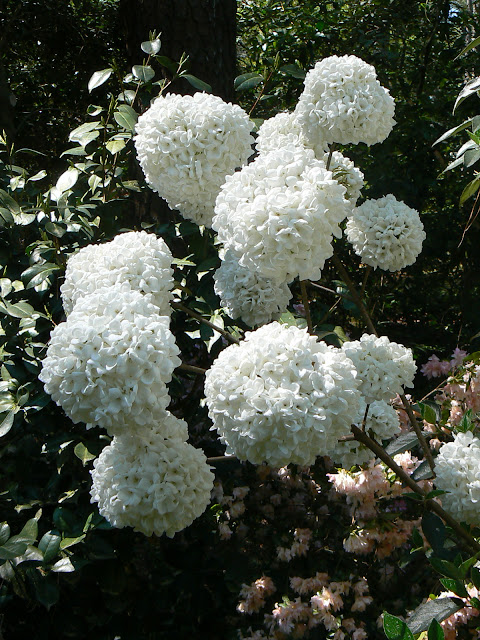 Last week, I got the phone call with a message I've heard many times over.

"You ought to be out here today.  It's the prettiest it's ever been."

It was Margaret Moseley, 95, calling me to say that along her driveway, the sasanquas were creating a cascading fountain of pink and white some 20 feet tall.  Not only that, her Camellia sasanqua 'Yuletide' was covered in red flowers.  "You can't even see the leaves," she said.

I had a doctor's appointment (the kind you book a year in advance), and I couldn't get out there with my camera.  I was sick over this, because that night they were predicting the first hard freeze.  I live 25 miles away, and to get there, I have to go through downtown Atlanta.  If you've ever been here in a car, you know that traffic deadlock can occur at any time of the day.   After 2 p.m., you don't have a fighting chance.

So, I missed the peak of the sasanquas, although I did catch some early blooms.  Next year, I'll know to go at least every 10 days.  I can't miss this again.

I'm going to plan ahead, too, to catch Margaret's viburnum collection in bloom next spring.  It's a situation where I'll need to go often, since all of the shrubs don't bloom at the same time.

Here's one I caught at the height of perfection.  It's Viburnum utile 'Eskimo'.  I must have taken 20 photos of these exquisite flowers.  They were the purest white, and because this cultivar, introduced by the National Arboretum in Washington, D.C., doesn't grow as high as the largest snowball, Viburnum macrocephalum (Margaret's are now huge trees - breathtaking, but hard to photograph the giant blooms up high), I was able to get some good close-ups.

Margaret has many viburnums that are sweetly fragrant, and her garden is filled with perfume when they are in bloom.  'Eskimo' doesn't have any fragrance (despite a fragrant parent), but what it lacks in that department, it makes up for in beauty and a more compact size.  This is a good choice for a smaller garden.

I will add that Margaret makes sure her flowering shrubs have a good backdrop.  If this plant were sitting by itself in a lawn, it wouldn't be nearly as showy.  But backed by the dark green foliage of camellias and sasanquas in Margaret's garden, it's near perfection - truly a snowball to dream about.
Posted by Martha Smith Tate at 8:47 AM 1 comment: