A garden to look down on 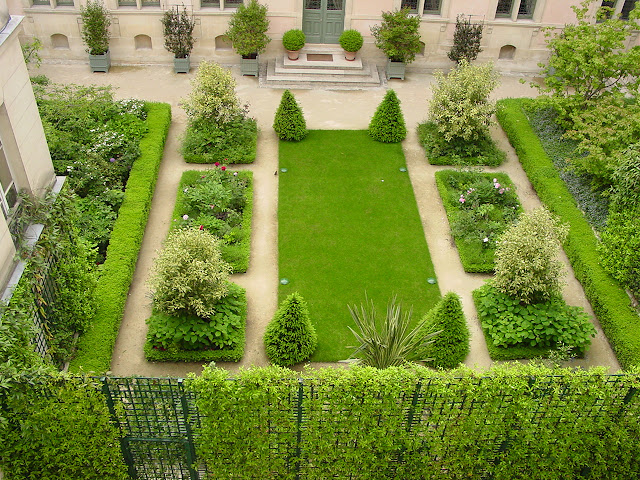 Lately I've been thinking a lot about garden styles since I've lost so many big trees and now have some sun - something I've never had here in 38 years.  I used to dream that I had a cottage garden full of sun-loving flowers.  Of course, the house and lot didn't look anything like mine (dreams are like that), but I do think that my obsessive longing for sun must have had an impact on my sub-conscious.

So, what does this have to do with the above photograph, obviously a formal style I would never want or even have a grand space for?  The fact is, I've already borrowed something from this garden, something I never dreamed I would do.

I took this photograph in Paris from an apartment I rented in the Marais district when my two daughters and I took a trip to celebrate birthday/graduations.  I never saw one person in the garden, nor did I ever see anyone enter the opposite building.  I don't know if it was another apartment building or some kind of business headquarters or offices.  There was no one to ask, since the rental was through an agency.

I do have good memories of sitting by the open window with my breakfast (part of a fresh baguette slathered with unsalted butter and cherry Bonne Maman preserves - I haven't found that flavor in any store here) and a piece of Caprice des Dieux cheese (can't find that here, either), along with my cafe au lait.  I would study the garden and try to identify the plants they'd used - I could see peonies and an allium, and I thought those variegated trees could be some sort of cornus.  There is Clematis armandii over on the left. And those espaliers in the boxes looked like sasanquas, but why would the left one have flowers at the end of May?

If I looked to my right or left out of the window at my level, I saw something much more to my liking - charming mansard roofs with window boxes overflowing with ivy geraniums.  The photos I took almost looked like paintings of an old, rustic Paris.  The style was in total contrast to the scene below and was something that pleased my eye much more than the stiff lines of the formal garden.

Yet, here's what I did.  I have a rectangular space surrounded by a rather unkempt hemlock hedge.  When I go on the back balcony (actually, I've always referred to it as a concrete deck), I look down on that area.  This past May, as I was staring down at the tall hedge with boxwood borders, wondering what on earth I could do now that two large oaks were gone, it hit me.

I came in here to the computer and brought up this picture.  See the two squares flanking a rectangle on each side of the center lawn?  At my house, where there used to be a rectangular lawn that never had enough sun to survive, I have made this same configuration, only I just have a single row.  Right now, I have cobblestones as the outline, and I haven't covered the surrounding hard pack clay with gravel (may have to go with sand to save money).   I put a wire obelisk in the middle of each square.  In the rectangle I have a taller tuteur I bought 25 years ago.

Right now, my composition looks awful.  There is a jumble of moribund tomato vines clinging to the wire frames, and some zinnias flopped everywhere, a couple still producing bright red blooms.  These temporary plants are headed to the compost bin soon.  Then, I'm going to make some decisions about what to put in the middle and how to make a very low box border to replace the cobblestones.  For the winter, I'm going to put two tall ivy topiaries in each square (that is, if I can get the containers moved - I'm afraid the ivy roots have grown into the ground where I plopped them some years ago by the basement door).

So, by next summer when I have it all together, I should have two squares and a rectangle within a rectangle surrounded by two rows of boxwood and a hemlock hedge (both already there).  Of course, it will be much smaller and narrower than the garden above and looser in feel.

I've dreamed of gardens I wanted, but never, ever would I have thought I'd ever choose this one to copy.  I must say, though, that I love it already, as crudely done as it is, and I look forward to next year when I can show you my version of a garden to look down on.
Posted by Martha Smith Tate at 10:13 AM 1 comment: