The lion's head maple - and it's orange 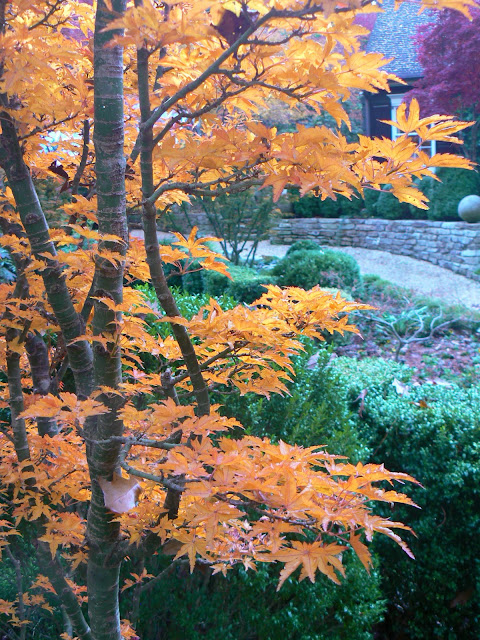 So sorry, but I had to.  I'm back in Bill Hudgins' garden with yet another orange tree.

I have photos of bright, gorgeous buttery yellow Japanese maples that form an umbrella above you, and of scarlet leaves that seem to be on fire when backlit by the sun.  But, I wanted to talk about this particular cultivar, and it happens to turn orange in autumn.

I started off the week on Halloween with a Japanese maple with very finely cut orange leaves.  I'm ending on an upright, compact plant that was one of the first Bill ever showed me.  This is Acer palmatum 'Shishigashira' (a.k.a. the lion's head maple).  I confess I can only identify it because of the bark.  And even then, I wasn't sure.  In the summer, the leaves of 'Shishigashira' are small and curled and remind you of parsley.  Here they appear larger, partly because of the angle and partly because Bill says that some of the leaves can be a bit larger and not so talon-like.

If you look closely, you'll see that the trunk of the tree is green.  The horizontal rings give it the look of bamboo. When you see it in person, it's such an unusual combination and completely unexpected.  Bill has this popular Japanese maple at his garden shop, and we featured it in the Atlanta Journal and Constitution several years ago.

The shape of the tree and its growth habit make it an ideal specimen to grow in a large container.  It also has a sculptural quality that works to frame a view, as it doe here.  In the background is the path that runs along the front of Bill's house with yet another Japanese maple in fall regalia, this time a soft burgundy.

Once again, it's the combination of the evergreens, the stonework and of course the extraordinary fall color (the spring is amazing, too, but that's another story) that make this garden one I keep going back to over and over again.
Posted by Martha Smith Tate at 11:11 AM 3 comments: