Will the real 'Nikko Blue' please stand up?* 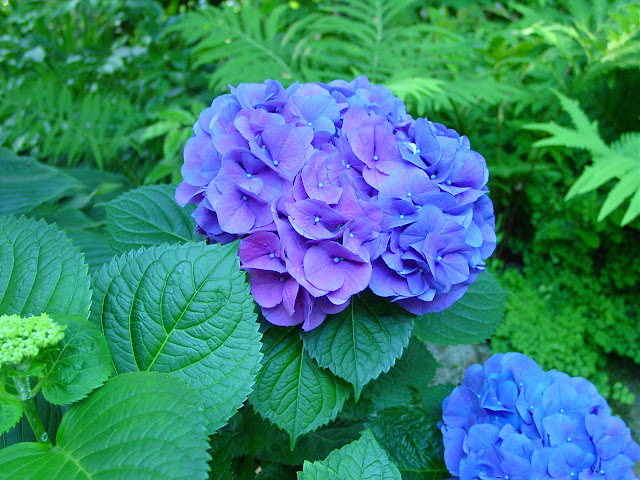 In the vast line-up of photographs I've set aside for this Web site, this one keeps drawing me in like a siren.  Here it is fall, and I am choosing this dazzling blue, which stands out whenever I go to the thumbnails and look at several pictures at a time.

The macrophylla hydrangea blooms you see now in the South are either brown or wonderful shades of maroon and purple, often tinted with green (unless you have 'All Summer Beauty' or other re-bloomers, which could have bright blue blooms along with pink, maroon, etc.).

Around the first of June four years ago, I drove up to a garden in Alabama.  At all four corners of the parking lot, the gardener had planted a 'Nikko Blue' hydrangea.  The totally different colors of the flowers on the individual shrubs confirmed something, but I'm not sure what.  One, there's controversy over whether all those hydrangeas sold as 'Nikko Blue', an old cultivar that has been forever popular, are truly 'Nikko Blue'.

A second consideration when looking at the same plant so close together is the variation of the soil.  Could it be that in one corner there is more acid or aluminum in the soil, whereas 15 feet away there's a totally different composition of elements?  I did ask if these were plants he'd bought separately, or had he propagated from just one plant.  The former was the case.  He'd purchased four individual plants at the same time.  So, which one was the real 'Nikko Blue', or were they all the real thing?  Whatever the answer, the above flowers were much more intense and beautiful than the lighter blue flowers on the other plants.

A friend who has macrophylla hydrangeas which now are the loveliest wine color has invited me over to show her how to layer the plants.  I'm bringing some bricks, and all we have to do is choose some lower branches that will bend down to the ground, make an indentation in the soil, then scratch the stem where it will make contact, cover with a bit of dirt and put the brick down to hold it.  I've done this at different times of the year (well, not winter), and it works.  I'm hoping by next May we'll have some rooted plants that we can detach from the mother plant.

My goal is to go back to Alabama about the first of June next year and see if that same hydrangea in the photograph is still the same stunning color of blue.  Then, I'll ask permission to layer the plant.  It would be an experiment, because I might get the newly propagated shrub back over here to Georgia and find that it's a completely different color.

Which makes me think of the late Penny McHenry, founder of the American Hydrangea Society.  What a character she was.  She kept passing a house which had the deepest, most beautiful shade of purple hydrangea she'd ever seen.  She stopped one day and obtained permission to layer the plant.  A couple of months later, she had her rooted hydrangea and took it back to her own garden.  When it bloomed, it was a pale shade of blue.  You just never know.


*For those of you too young to remember, there was a TV show called To Tell the Truth, where three  contestants would try to convince the panel (who asked them questions) that they were the person described at the beginning.  The panel would try to guess from the answers given.  At the end, the host would say, "Will the real (name of person) please stand up?  And he/she did.
Posted by Martha Smith Tate at 9:16 AM 2 comments: