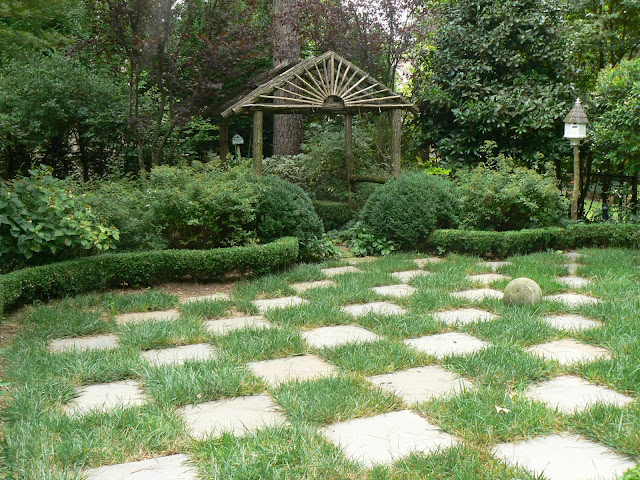 We're back in Ted and Pat Plomgren's imaginative garden.  Here is the other half of the lower level.  The photograph was taken in late July a couple of years ago, so it's not really fair to the shrub border behind the curving boxwood border.  I caught it at a time when not a single shrub was in bloom.

But, that's the beauty of good design.  This garden is stunning, even without flowers (I promise you, they do have something blooming year-round).  I have seen this checkerboard pattern used in several gardens, most recently on the American Hydrangea Society's tour.  One of the gardeners had taken a long, hedged-in walkway on the side of the house and installed pavers in a similar motif.  It was very effective.

If you'll look back at the posting on August 2, 2011, you'll see the opposite end of this level of the garden.  On September 9th, I showed a detail of that part of the garden, as well.  Later on, I'll post a photograph of the walkway that divides the two areas.  And after that, much more to come in this fascinating garden.
Posted by Martha Smith Tate at 7:13 AM No comments: