Hope for today and tomorrow and the next day 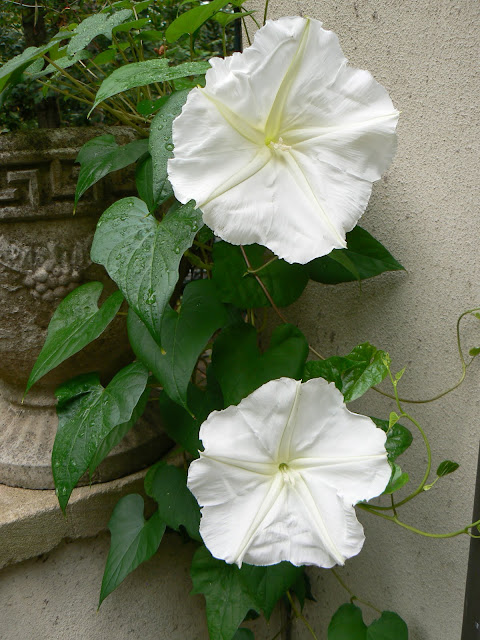 I must admit that yesterday was not one of my favorite days.  Early in the morning, a fleet of giant trucks came rumbling down the driveway and filled up the parking lot.  One of them carried a huge crane that looked like it could reach the sky.  They were coming to take down a white oak tree that was estimated by the city arborist to be 130 years old.

I had a love/hate relationship with this tree.  It had been spared at the last minute when we built our house 31 years ago.  My husband decided we could do without the planned carport and have a nice tree right up against the house instead.

In fall, the acorns would pound against the slate roof all night long for days on end.  The leaves fell late, so the gutters had to be cleaned out multiple times during autumn and then a final time after Christmas.  In 2000, an enormous limb fell and destroyed some limestone coping around a little boxwood garden outside the kitchen.  Every time a wind would come up, I would shudder, thinking about the other giant limbs that hung over the house.

The tree's fate was sealed last Sunday when a 40 foot long branch came crashing down and brought two other huge limbs with it.  The arborist said the tree had to come down immediately.

So, yesterday the tree company had it down before noon.  This morning, the main trunk is still lying on the ground in big chunks.  I measured the diameter of the stump, which will be ground up today.  Sixty-one inches.  That's pretty big.

While they were sawing away, I went out on the back terrace and was greeted by the moon flowers you see in the photo above, the seeds a gift from a friend.  I got closer and caught their sweet fragrance.  I was immediately cheered by their pristine beauty.  Unlike the oak that had lasted for more than a century, these very flowers wouldn't make it through the day.  But, I could already see some more twisted buds ready to open during the night.

Moonflowers are annual vines, and like day lilies, the individual flowers last only a day (or rather a night and part of the next morning).  But it is exciting to know that there will be more big, white blossoms the next day and the next.

Before I get deeper into this maudlin metaphor (I feel ashamed thinking of all the real suffering and loss out there), a word about growing moonvine (Ipomoea alba).  I don't have a lot of foliage on either of my plants, which are growing in containers.  A friend advised me not to use fertilizer because I would get too much foliage and not enough blooms, which is what happened to me before.  Another gardener called to say she must have 40 flowers on her vines and that she had poured on a bloom buster type fertilizer with a high middle number.

I planted the seedlings (my friend had soaked the seeds and gave me small plants) back in May.  Yesterday, I was happy to have the big, fragrant flowers to enjoy while the tree men buzzed away.  Sometimes, there's nothing like a flower to make it all seem better.
Posted by Martha Smith Tate at 7:04 AM 2 comments: