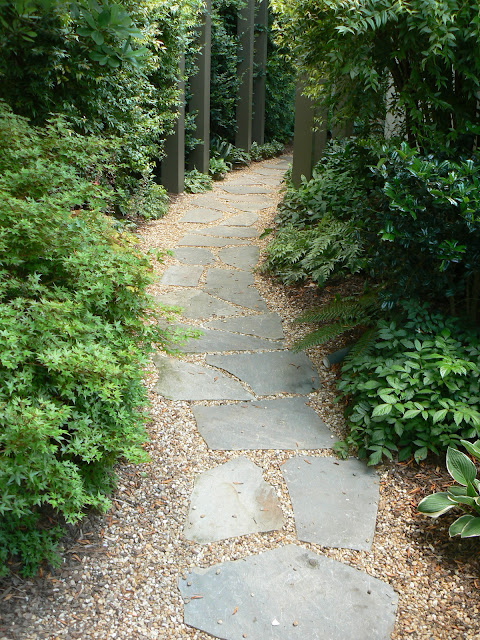 Sometimes I do things and then say, "Never again."  But then my memory will be short, and I'll repeat the same error in judgment.
Years ago, at a time when the then fledgling channel HGTV was coming on the scene, the creators of A Gardener's Diary (ours was an original show; we launched with the channel) agreed to make a garden for the Southeastern Flower Show.  I was conveniently out of town when my two partners did all the set up.  It was a huge undertaking.  I was there, however, for the takedown, and I vowed never to get caught doing such hard labor again.
I bet it wasn't two years later until we bowed to pressure and found ourselves doing yet another display garden for the show.  The 20' x 20' space didn't sound so big until we started trying to fill it up.  We first had to create a path through the display.  We put down pea gravel and then hauled in some flat Tennessee stone - just like in the above photograph.  Then came the plants and benches and trees.
The garden, which depicted scenes from four of our shows, was a great success, but no award winner.  It did make the front page of the Atlanta Journal & Constitution, however.  A couple of bigwigs from HGTV came down for the opening, and Kathryn MacDougald and I, producers of the series, were proud of our handiwork.
But then it came time to take it all down.  I'll never forget the seemingly endless trips in my husband's truck, hauling cobblestones that weighed a 100 lbs. each (or so it seemed) back to Kathryn's.  I also brought the flat Tennessee field stone back to my house where it had been stacked up for years.  That's when it dawned on me.
I had just helped make a path that looked really good, like it had been there forever.  All it took was some edging (the cobblestones), pea gravel and stepping stones.  A light bulb went off.  Instead of a messy, weedy area on the side of my house, I could make a path to connect to the back.  After all, I'd always said I wanted to be able to walk all the way around my house, and here was an easy project I could do myself.
I ended up using builder's sand instead of pea gravel to save money.  I had some cobblestones and lined them up for the edge of the six foot wide path.  Then I arranged the gray flag stones.  Voila.  I had a way to get to the back of the house without fearing that in passing a snake might wrap itself around my ankles.
I took the above photograph on a garden tour, and it reminded me of our path at the Flower Show.   My own path still has sand (which needs refreshing), and mine is straight, but I thought the gardener who created the above scene did a wonderful job.  She added an arbor and lined her curving path with shade-loving plants.  The area is on the side of her house and connects the front parking lot to her back garden.
So, if you have a space you want to tame, this is a good do-it-yourself garden project that can be accomplished in a day's time.  When all is said and done, I think it's a fairly easy way to get from one place to another.
Posted by Martha Smith Tate at 10:39 AM No comments: