Goodbye to old (100 years plus) friends 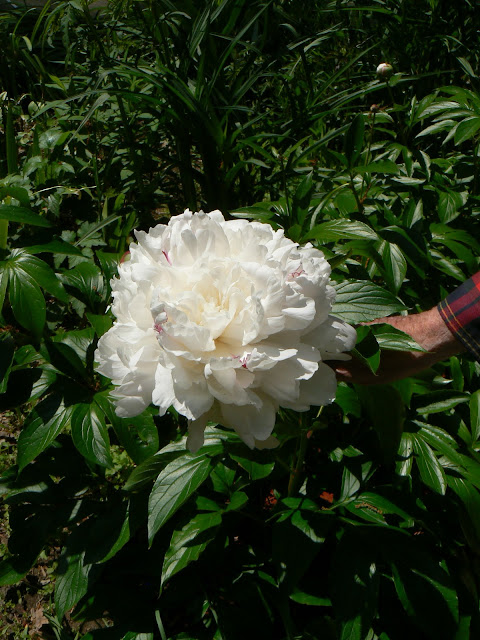 This past Sunday, I arrived home from church to find some limbs down from a giant white oak next to my house.  I looked up and saw something ominous.  Two large limbs were resting on another lower limb.  It was a matter of time until they all came crashing down.
The time came that very afternoon.  I had gone to visit an elderly friend, and when I returned at twilight, it looked like a large tree had fallen into the parking lot.  One glance up, and I knew that it was over.  This tree that had probably stood for 130 years was doomed.  There was a gaping hole in the canopy where other limbs had broken off in the impact.
The city arborist came yesterday and made the terminal diagnosis.  Then the tree man came and remarked how my air-conditioning bills are going to skyrocket and pronounced that it will cost a fortune to take it down.
This is all sad enough (not tragic in the overall scheme of real tragedies, of course), but I think I've lost my mother's prized 'Festiva Maxima' peony.  This is certainly not a rare flower by any means, but it is special because it was given to her by Mrs. Thomason in our town.   The latter had brought it from her childhood home and then shared it with Mother, so it had to be well over 100 years old.  I rescued the plant when I discovered that a well-meaning young yard person had been cutting it down with a weed-eater.  There was no foliage left, and I foraged around and found the tubers, which broke apart when I dug them.  I brought three clumps home and planted them.  Only two survived.
On June 18, a tree fell onto a 1926 cottage at the back of my property.  For days, the tree rested on the area where the peonies were planted.  They were struggling anyway (only one bloom in three years), but now that the tree is gone, I can't find any trace of the plants.  I keep watering the spot, hoping that underneath are those red eyes that will return next year.  I don't have the heart to scratch around and see if they're there.
The photograph above is of Milton Kuniansky's 'Festiva Maxima'.  I actually have another plant that I dug when a friend moved.  It's plenty healthy and has produced several flowers in the few years it's been here.  So, it's not the fact that I can't get another peony just like the one Mama had, with the giant, pure white, tissue paper blooms splotched with red (and so fragrant).  I just hate it that I lost a century old friend that was so special.  I can console myself, though, in thinking back on the many gorgeous bouquets the plant provided over a very,  very long period of time.
Posted by Martha Smith Tate at 8:02 AM 1 comment: