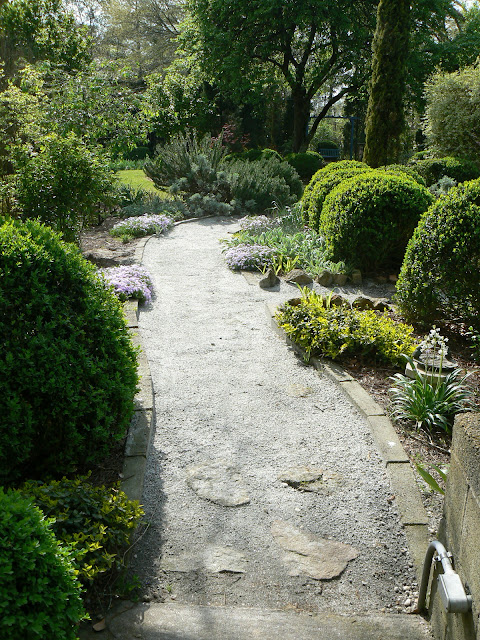 Ever since I took a picture of this path in Rhoda Ingram's garden outside Griffin, Georgia, I've tried to deconstruct the elements that make it so appealing to me.  At first view, it seems a very simple composition - a curving gravel path lined with some sort of cement block pavers with various plantings along the way.
But, I think it's the blending of formal and informal elements that makes it so pleasing.  For instance, remove the more formal clipped boxwoods, and the scene loses some of its personality.  Then, imagine if the path were straight instead of winding in a gentle curve.  Taking away this informal outline would certainly make the path less appealing.  I love the fact that some of the ground covers spill out into the walkway and how the tall, columnar form of what appears to be an Italian cypress (in the background on the right) adds an important line to the overall composition.
When I came back from taking this picture, I tried to figure out where I could make a similar path.  Unfortunately, I have very few flat places on my property.  Still, I can see ideas I could borrow to create something comparable in feeling.  I'm going to keep studying this photograph, and I think I'll eventually figure out what to do.
Posted by Martha Smith Tate at 5:58 AM No comments: