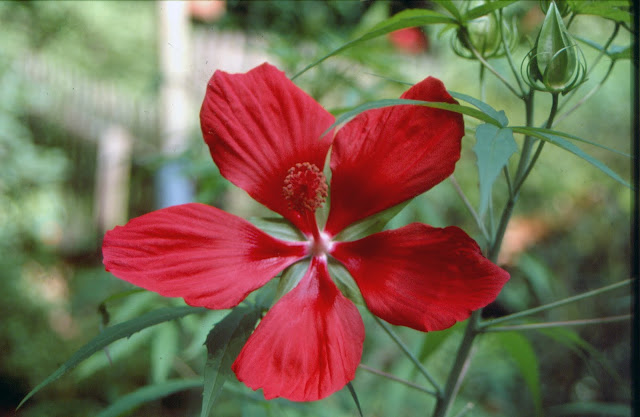 In my treasured copy of the 1996 issue of Garden Design magazine is a section featuring some of the great writing of American botanist William Bartram (1739-1823).  I don't know how many times I've read these pages where Bartram, a native of Philadelphia whose father John Bartram was the chief botanist of the American colonies, writes about his travels in the southeastern United States.
It literally makes my hair stand on end to read his accounts of coiled up rattlesnakes, alligators and water moccasins, all of which he came in close contact with as he was exploring the swamps of Florida and Georgia.  It was on a trip to Georgia's Altamaha River that he and his father found a tree resembling a gordonia, with white, magnolia-like flowers.  William Bartram returned and took seeds and propagated the plant.  Accounts vary, but the tree was last seen either in 1790 or 1803.  It has not been found in the wild since, and all specimens of Franklinia alatamaha are descended from the Bartrams' seeds.
As to the photo above, this is another native that was first described by William Bartram as he explored the shores of an island in Lake George in northern Florida.  He says of Hibiscus coccineus, "This most stately of all herbaceous plants grows ten or twelve feet high, branching regularly, so as to form a sharp cone.  These branches also divide again, and are embellished with large expanded crimson flowers.  I have seen this plant of the size and figure of a beautiful little tree, having at once several hundred of these splendid flowers, which may be then seen at a great distance."
The flower pictured here was growing in Milton Kuniansky's garden in Atlanta.  The perennial, hardy to Zone 7, begins blooming in late July and continues through August.  The plants usually reach six feet tall in cultivation.  The exquisite red flowers attract butterflies and hummingbirds.  The leaves have the distinction of closely resembling those of a marijuana plant.
If you want to grow this lovely native, be sure to plant it in an area that you can keep moist.  I've found that it will tolerate a short spell of drought, but since Hibiscus coccineus is native to swampy areas, it appreciates continuous moisture.  If you give it the right conditions, it's very easy to grow and a great way to provide color in the summer garden.
Posted by Martha Smith Tate at 7:59 AM No comments: