Giverny at another time 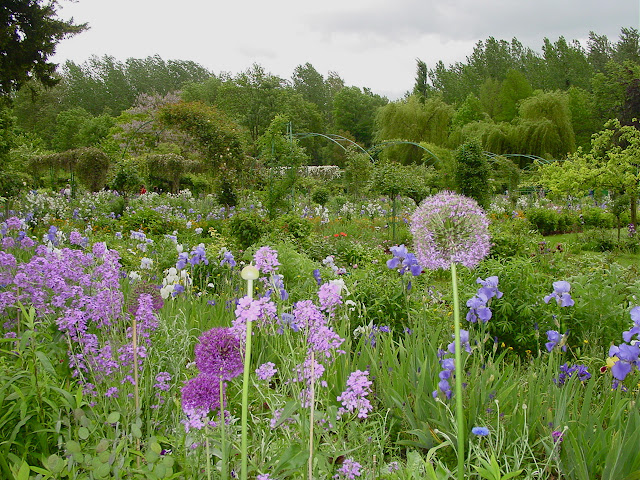 One thing I had to do as a scout for A Gardener's Diary, which aired for over a decade on Home & Garden Television, was to have "future eyes."  I would usually see a garden months before we'd go to tape a show.  I'd listen to the gardener, look at plants that were dormant or just coming up and check out any photos the gardener had.  That way I'd know how to write a treatment and have a good guess at what would be in bloom when the crew arrived.

It was always a gamble.  I remember one year we were scheduled to go to a garden featuring antique roses in the Napa Valley.  The owner and I decided on a date, based on the usual peak bloom time.  But a few weeks later, he called and canceled.  The roses were already in full bloom, and the shoot was still three weeks away.  That happened in Georgia, when a garden with acres of azaleas bloomed two weeks early.  I went there on the date we had originally scheduled, and all that was left of what must have been a colorfest were shriveled brown flowers.

When I took this picture in Monet's garden at Giverny, it was the end of May.  As you can see, there were iris, some alliums, hesperis, or sweet rocket (the lavender colored flower to the left), orange wallflowers, a few poppies and Clematis montana 'Alba', the latter not in this photo.  I think I can spy a blue bachelor's button down in the foreground to the right.

As I mentioned yesterday, a friend is due to visit Giverny in August.  I'm going out on a limb here, but I am guessing (literally) that in place of what you see above, there will be plenty of primary colors, with dahlias, maybe cosmos, sunflowers, perhaps zinnias, lilies, celosia, lots of bedding plants like geraniums and begonias, and nasturtiums that will be trailing out into the main arch-covered path.

I'll be interested to see when my friend returns with pictures if my "future eyes" are still working.  When I was younger, I was in France several times in August, but I never paid a bit of attention to what was in bloom.  Now that I care about such things, maybe I'll get to go again one of these days to check it out in person.
Posted by Martha Smith Tate at 4:28 AM No comments: