Only in the movies 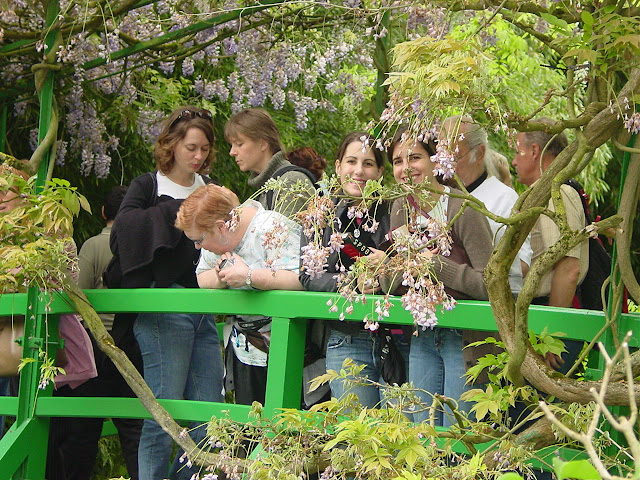 A friend is leaving for a ten day stay in France soon.  She'll mostly be in Paris, but is taking an excursion to Normandy to see the beaches and to visit the port towns and see Mont St. Michel.  On the way, she's stopping by Monet's garden at Giverny.

A few years ago, I took my two daughters to France, and we did a three day trip to Normandy, also visiting Giverny.  It was an overcast day in late May, and we hit the height of the iris-allium-clematis season.  We also hit the crowds.

As you can see, the wisteria on the famous bridge over the lily pond was just finishing up.  I stood on the shore, waiting to get a good picture of my daughters - hopefully alone - on the bridge.  That didn't even come close to happening, and they finally ran out of patience and crossed on over.   Can you guess which ones they are?

I just saw Woody Allen's Midnight in Paris, and I wanted to shout at the screen when Gil and Inez appeared on the bridge above - all alone with the pond and the lily pads.  Not a person in sight;  Giverny was all theirs.

A book I have shows a photograph of Monet in the garden next to some beds with tree roses underplanted with geraniums.  It looks like the beds are edged in dianthus foliage.  I took a picture of this same scene, but the roses weren't yet in bloom, and the geraniums had just been planted.  I'll have to tell my friend to look for this area to see if it looks as good as in Monet's time.

More this week on Giverny and some great ideas from two Normandy gardens.
Posted by Martha Smith Tate at 5:57 AM No comments: