The flower that almost never was 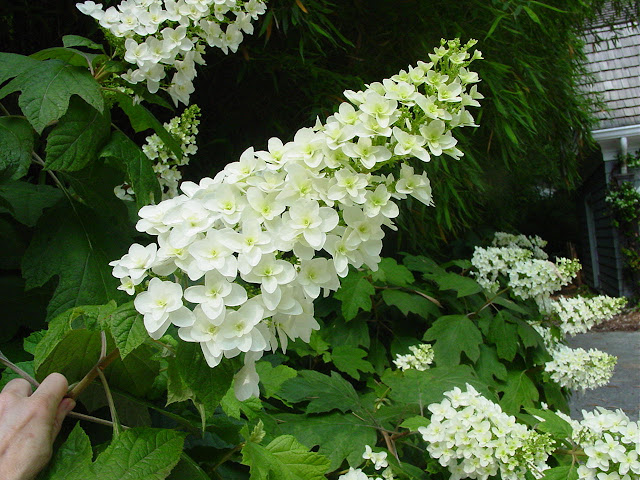 If a tree falls in the forest.....if a plant is never discovered, does it exist?
Hydrangea quercifolia 'Snowflake', the double flowering oakleaf hydrangea, might not be in my garden today had it not been for a chance occurrence.  Thanks to a Birmingham, Alabama, family, we have one of the most spectacular plants for May-June bloom.
In the late sixties, a man who lived on Eddie Aldridge's street brought Eddie's father, a prominent nurseryman, an unusual double bloom of the native oakleaf hydrangea.  (The oakleaf hydrangea is indigenous to the area around Birmingham and to a few other sections of Alabama, a corner of Georgia, and a piece of Florida.  The plant is now the state flower of Alabama - it used to be the camellia, which, of course, is from Japan!)
The man said the unusual bloom was growing in a lady's yard in Lipscomb, Alabama.  Eddie and his father went up to see the woman.  She said that her grandmother had brought the plant from  Jefferson County.  The grandmother had found the flower in the wild, apparently a chance seedling.
In the early 1970's, Eddie's aunt called to say that someone had found another double oakleaf hydrangea bloom at a Methodist church camp, not far from where the original plant was found.
"We went up and inspected the plant," said Eddie.  "It was struggling underneath a post oak, right up next to the roots.  It only had one or two blooms on it."
As far as Eddie knows, these two plants are the only ones ever found.  He and his father had Dr. Joe McDaniel, an Alabama native who was head of the horticulture department at the University of Illinois, come down and describe the plant. (It was Dr. McDaniel who helped introduce the Hydrangea arborescens 'Annabelle').
The Aldridges decided to patent 'Snowflake'.  Eddie says that the patent was not to make money or get royalties (usually, one must pay for propagating patented plants).
"The only reason for the patent was because I had noticed that patented plants gained a lot of attention," he explained.  "It worked.  Southern Living and Better Homes & Gardens featured it.  We never got a single penny for it.  All we wanted was to share it."
It took until 1980 before there were enough plants to distribute 'Snowflake'.  The hydrangea is sterile, with no pollen and no seeds, so it has to be propagated from cuttings or divisions.
Eddie says that 'Snowflake' is in extremely short supply still, because the demand for it has been so great.
"We need to get people out there to grow it," says Eddie.  "They will grow as far north as New York State.  It is popular all over the world now.  It is one of the most popular plants in Japan.  They sell six inch pots with one bloom on it for $40 in grocery stores."
'Snowflake' was also introduced to Europe in the 1980's.  In 1993, it was the featured plant on the cover of an international catalog.
I am proud to say that Eddie gave me a plant, and it is thriving.  Last year, the blooms were so long and large that they were practically obscene.  This year, the blooms have been large, but not overly so.  The bad news is that the deer were eating the blooms.   I outsmarted them and cut some of the flowers for bouquets, which were spectacular for a few days.
I find it fascinating that every 'Snowflake' in the world came from that one plant in Alabama.  And, it almost was never to be.
Posted by Martha Smith Tate at 1:56 PM No comments: