The year of the golden holly 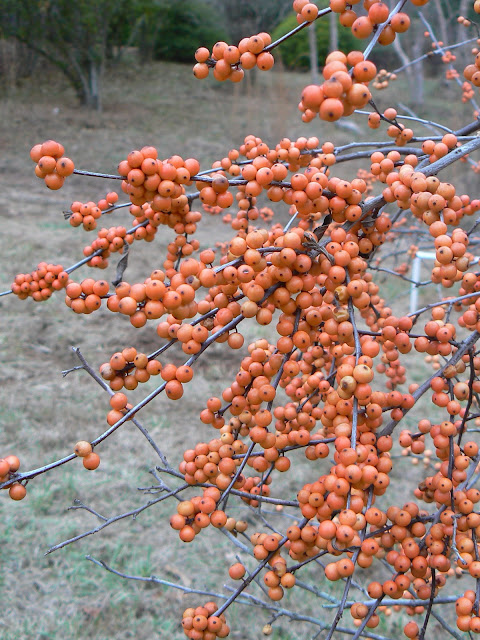 It was my lucky day.  December 6, 2008.  I stopped by Wilkerson Mill Gardens near my hometown of Palmetto, Georgia.  Elizabeth Dean and Gene Griffith are the husband and wife owners of this nursery that has provided gardeners everywhere with wonderful, unusual plants (they're open only on certain weekends in the spring and fall; most of their business is mail order from www.hydrangea.com).

At any rate, Gene and a couple of other guys were sitting by a fire out in the open.  I looked and saw several branches of the deciduous holly, Ilex verticillata 'Winter Gold', lying there, waiting to be thrown on the pyre.  I began to protest, and Gene pointed out that these particular branches had some bad places and couldn't be sold.  I begged for mercy.  They didn't look so bad to me.  Gene graciously let me have the doomed holly.

Back home, I culled the offending berries (there weren't that many) and attached the branches to a chandelier in my breakfast room.  I added some cedar from the farm, and if I do say so myself, it looked beautiful, although a little sloppily done.

Next, I found a Provencal tablecloth I'd bought in France but never used.  It was mostly green and yellow with a few gold touches.  In the middle of the table, I put a glazed green and terra cotta bowl (also purchased in France) and filled it with oranges.

That room, with a mixed green garland around the French doors, looked really pretty.  The orange berries held up just fine.  I meant to send Gene and Elizabeth a picture, but never did.  Maybe I'll post one a bit later in December to show how lovely the almost-lost berries turned out.
Posted by Martha Smith Tate at 7:48 AM